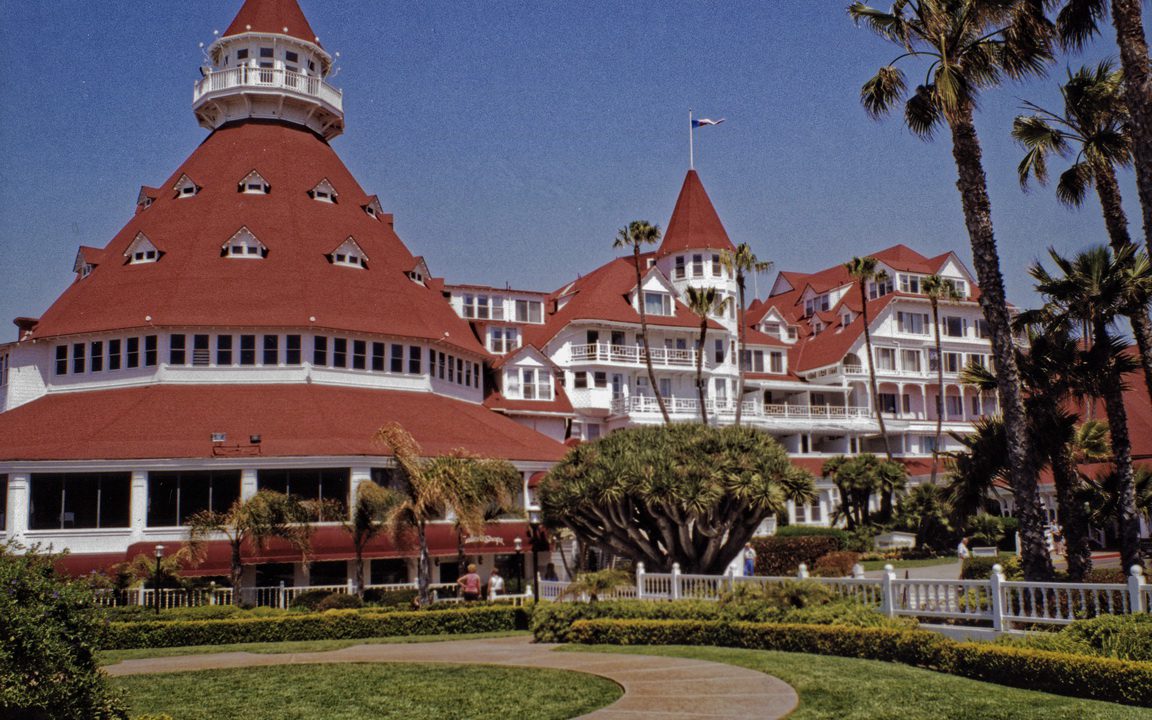 The Seminole Ritz, Miami – or is it? 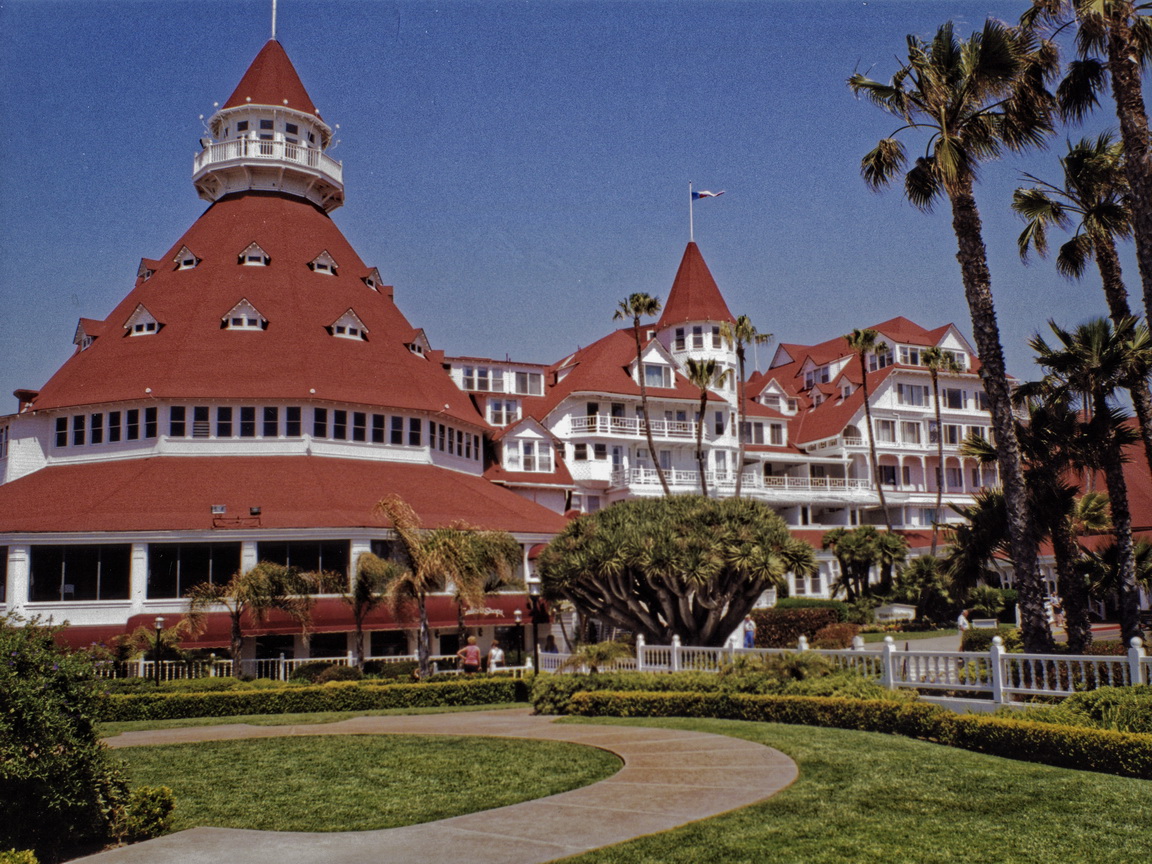 Only five or six years separate the release of Les Vacances de Monsieur Hulot and the film voted the best comedy ever made “Some Like it Hot” but their style of humour could hardly be more different. Tati’s humour is observational and of a kinder nature. He accepts people for what they are and pokes gentle fun at them and is himself the butt of much of the humour.

In the case of “Some Like it Hot”, nothing is quite what it seems, starting with the” Seminole Ritz” at Miami, which is actually the “Hotel Del Coronado” at San Diego. Tati clearly has an affection for people as they are and the humour is derived from that source. In the case of Some Like it Hot it’s more a matter of, if one reality doesn’t work for you, then try another! Interestingly too the Tati movies emerged from a recently occupied country where America could be said to be the victorious nation who had brought freedom to France.

I must admit that originally in thinking about this blog I might well have been tempted to make comparisons between the two nations and their respective response to trhe effects of war and the cost of the victory achieved, for example. – “there are no real winners in war”. But a closer look at the origins of Some Like it Hot point the way to an altogether different approach.

My thoughts elsewhere on the influence of emigre architects and the American architectural scene: Neutra, Schindler, etc. have a parallel also in the movie industry, where war brought about a similar displacement of talent in the movie industry in Europe  with ambitious screen-writers, directors, etc., forced to find employment in the new world of America  – specifically Hollywood. Billy Wilder, born Samuel Wilder in Austria. was a screenwriter in Berlin, but moved firstly to Paris on the rise of the Nazi Party, and then Hollywood in 1933. The well-known storyline of Some Like it Hot, set in a prohibition ridden America iin the early nineteen twenties owes much to a French film of 1935 and a subsequent German remake of 1951 “Fanfares of Love”, where the two main characters are forced into cross-dressing to find employment as musicians. The German screen-writer and actor, Robert Thoeren, in fact made an early pitch to Wilder, explaining the storyline of his film. Wilder later disclaimed any influence with the earlier movie but there is much in the movie that bears comparison. Where Some Like it Hot is unique however is in the depression era setting of prohibition and the underlying threat of gangster violence that exists throughout the film (the massacre scene itself is brutal and shocking). The humour arises from the cross-dressing, but the cross-dressing is provoked by the threat of violence. It may well have been the case that sreen-writers and directors and those who chose to build a new life elsewhere, did so also because of a similar threat of violence they experienced first hand from a Nazi regime that they were out of sympathy with, making it a simple matter for Wilder to add just that crucial element of personal danger that separates his movie from the earlier films I have mentioned. It also made it easier to accept cross-dressing where such a threat of violence existed. Even so, not every part of America was ready to go along with that as some of the earlier test screenings were to show, and Joe E Brown’s famous response to Jack Lemmon’s character when he finally admitted he was a man of, “well nobody’s perfect”, would hardly arouse such hilarity in today’s age where relationships and marriage across the sexes is a commonplace.

But for myself, as ever, the real star of the show and the reason I made my own personal pilgramage to “The Del” (1998) was the extraordinary Queen Anne style architecture of the 1880s (the building was openend in 1888). It is said that Wilder observed, ” We looked far and wide and this (The Del) was the only place we could find that hadn’t changed in thirty years and people who  have never seen this hotel will never believe we didn’t make these scenes on a movie lot. It’s like the past come to life.” In fact only the exterior shots were shot at the Hotel with the interiors shot off-site at faithful reproductions of the hotel’s interior.

There is little information on the hotel itself other than what can be gleaned from official tourist handbooks published by the hotel who credit the original vision for the hotel as the brainchild of Ex railroad executive Elisha Babcock who joined forces with long standing friend H.L.Story of the Story and Clark Piano Company. Their preferred architects were the Reid Brothers of Evansville Louisiana whose previous expertise lay in railway architecture. Developers didn’t hang around in those days where investment was concerned and construction started in March 1887 and the hotel opened just eleven months later. .America is notoriously profligate with its architectural masterpieces but Babcock wanted to create a resort hotel which would become the talk of the western world and in this it has to be said he has been shown to be resoundingly successful. The hotel has featured in fiction from time to time and also figured in many historic events in American history with the Del providing the backdrop. But as I have said: In the case of “Some Like it Hot”, nothing is quite what it seems, starting with the “Seminole Ritz” at Miami, which is actually the “Hotel Del Coronado” at San Diego.

.As the piece in “BBC Culture” reminds us (see link below): Look at the beach scene with Joe and Sugar. It was written by two men who were once called Samuel Wilder and Itec Domnici, and acted by a man and a woman who were once called Bernie Schwartz and Norma Jeane Mortenson. Schwartz, who renamed himself Tony Curtis, is playing Joe, who is pretending to be Junior, using the mid-Atlantic vowels of Cary Grant, who was once called Archibald Leach. Norma Jeane Mortenson, who renamed herself Marilyn Monroe, is playing Sugar Kowalczyk, who renamed herself Sugar Kane”.You can be anyone you like – in Some Like It Hot. It’s the American way.

http://The Greatest Comedy ever Made 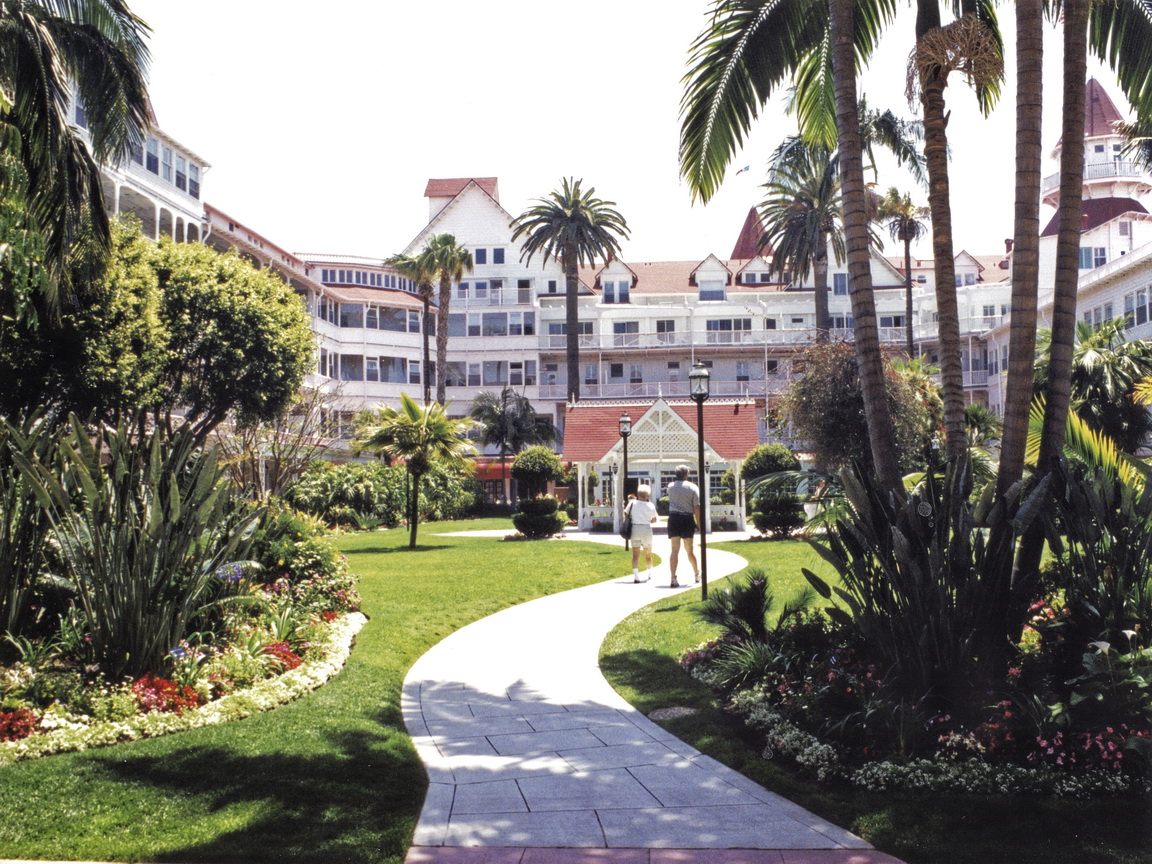 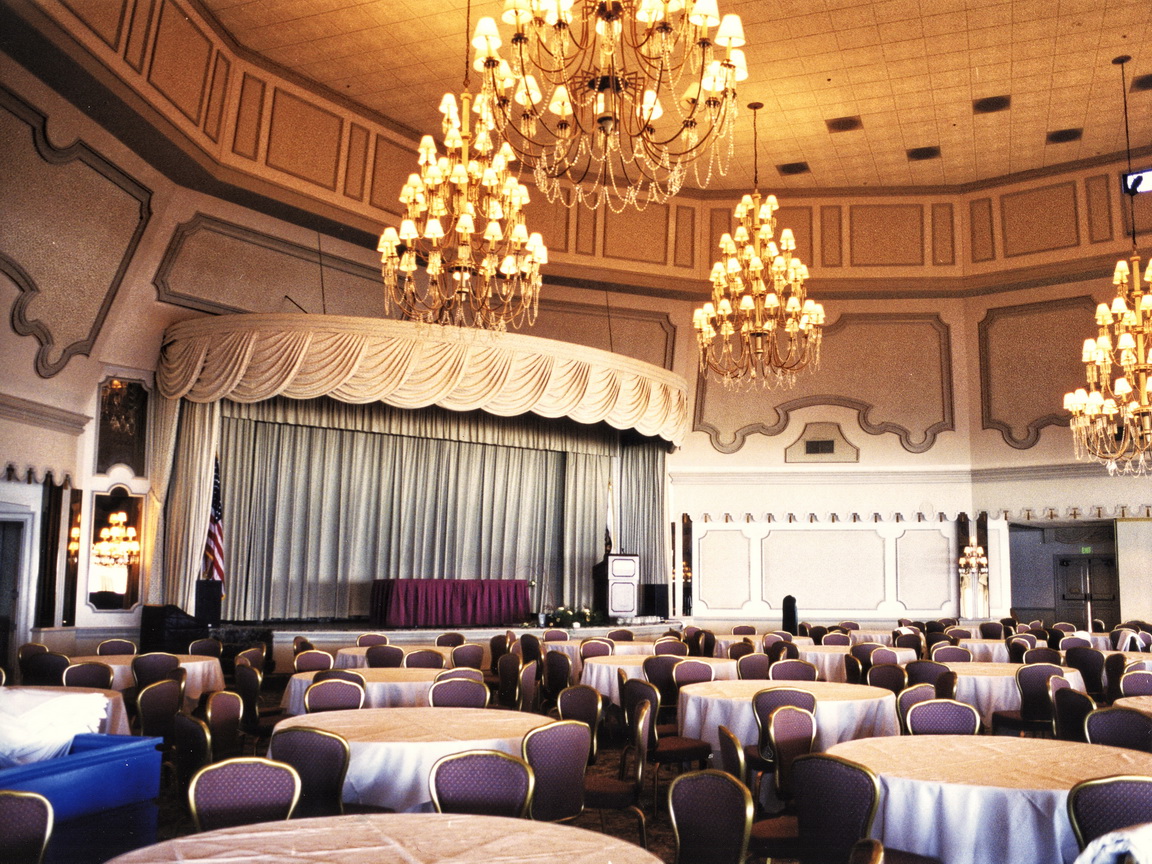 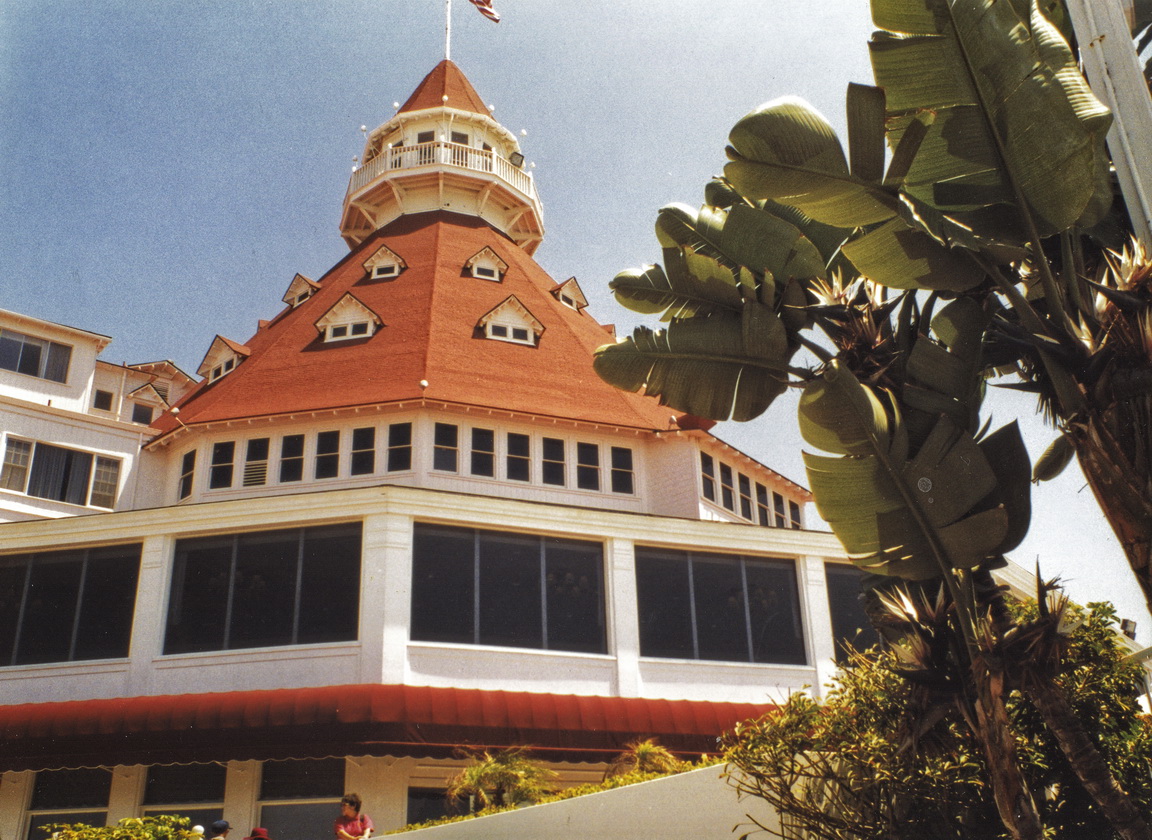