‘You Cannot Be Serious’ 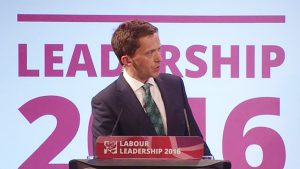 The ballot papers will be going out shortly for those Labour Members who are entitled to vote in the leadership election between Jeremy Corbyn and his challenger Owen Smith. No coincidence then that at the weekend before voting papers are sent out, the Observer carried a piece by London’s Mayor, Sadiq Khan, ‘We cannot win with Jeremy – – so I will vote for Owen Smith’. To hammer the point home the Observer’s front page lead story was ”Ditch Corbyn now or lose to Tories, Khan warns Labour’. While Khan’s piece was clearly aimed to influence voters it is also a measure of the desperation felt by those opposed to a continuation of Corbyn’s leadership.

For many in the Labour party the views outlined by Corbyn strike an  emotional chord, and to those people I sense that what motivates them is not really a question of Corbyn’s ability to provide competent leadership or otherwise, but rather a determination bordering on hysteria that the holy grail of the purity of Corbyn’s views, as they see it, should not be taken away from them. In that respect, they are prepared to overlook any consideration of lack of competence or intellectual clarity that Corbyn may be perceived to have as seen by others. Indeed Owen Smith, a capable and articulate debater was unable to convince a majority of the allegedly ‘uncertain’ audience at the Leadership Debate of August the 17th chaired by the BBC’s Victoria Derbyshire. When asked at the closing of the debate if any of that part of the audience had now decided who they should vote for a clear majority crossed the floor to register a vote for Corbyn.

The public Debate held by ITV in Birmingham on the following day was I thought balanced and well led by Carl Dinnen but there was little doubt that the audience present were for the most part Corbyn enthusiasts judging by the applause given to the participants at crucial junctures. For myself however I was increasingly concerned to see that Corbyn in dealing with all questions was literally reading from a pre-prepared crib sheet and not looking either at his opponent or the audience. After a while this became, as well as the usual unthinking abuse, a feature of the live listener feedback feed being shown simultaneously with the broadcast and there were those who took the view: well anyone would go into a debate with notes and those who thought that it showed Corbyn’s lack of grasp of the subjects under debate. But for me it called to mind the famous expression of the young John McEnroe during Wimbledon: ‘You Cannot Be Serious’. Corbyn over the period of his leadership during exchanges at Prime Minister’s Question Time has been using a similar technique, such that the watching viewer is only able to see the top of a balding head and not the expression on his face. By comparison, both David Cameron and Teresa May have shown a full grasp of their subject and speak directly and extemporaneously to Corbyn and to their audience. It is called communication and is clearly a skill that Corbyn shows no inclination to master. His habit of reading from notes, has no doubt been developed over may years of caucus meetings in closed rooms speaking to the converted, but here he was in a public debate arranged for the sole purpose of communication with an audience both within, but for the most part outside, the immediate debating venue, the television audience. You would have thought that a professional politician of many years standing would have honed his views on all such subjects and would have no difficulty in speaking fluently on subjects that he felt deeply about, but not Jeremy Corbyn.

Corbyn’s record of protest against the policies of his own party, whether you agreed with him or not, is well chronicled, but I am of the view that while it may in itself be partly habit developed over the years, it also stems from an inability to think quickly and develop a clear direction and policy of his own. He is in that respect a ‘reactionary’ and not a little lazy into the bargain and finds it difficult to be proactive. He is of course getting older and ‘old dogs new tricks’ may partly explain the conundrum, and I speak as one quite a bit longer in the tooth than Jeremy. Corbyn however missed his big chance and opportunity, as a result of his own personal vanity, during the Referendum, where had he chosen to, he could have provided much needed leadership and spoken for Labour and the whole country in opposing Brexit. But I am not prepared to be quite so charitable, I simply do not think that he is, or ever has been bright enough, nor do I believe that he has shown the capability to bite hard on the pressing political issues of the day and come up with the positive contributions that would have provided him with a platform leading to personal promotion within the party at a much earlier time. His parliamentary colleagues understand this very well of course but while they may hint at the problem, they can never quite bring themselves to say it (perhaps concerned for their own careers within the party). I simply do not believe that the revolt against Corbyn’s leadership within the parliamentary Labour party is in any sense a coup. His colleagues have universally come to the conclusion that with Corbyn as leader they risk losing their own seats come a general election. Corbyn will not have been the first party leader to be a bit dim: think of Iain Duncan Smith, Lord Home (who). The trouble is I have endured many of them over my time, but never before in the Labour Party. And the Conservative Party have a brutal way of dealing with these matters: such individuals literally disappear into obscurity.

When Corbyn first stood as a potential Labour Leader I took the view based on my own experience of similar matters, that he might just make a short list as a possible history or geography teacher in a minor public school, I now feel that even that may be beyond him. What I am saying is that I have never been so despairing of the future of the Labour Party as I am under such leadership and that while I may not be voting for opposition parties, I am unable to countenance this country being led by someone so patently incompetent. Corbyn may be seen in time to be an unfortunate error on behalf of the Labour Party but can you imagine a man with such flaws actually leading the country, dealing with people such as Putin and many other leaders who believe me, share none of his alleged niceness. It’s a cruel and unforgiving world out there and we will need someone of great ability, mental toughness and made of the sternest qualities to provide the leadership that Labour and the country so desperately need. To put the problem into context: if you had to pay your own hard-earned money to employ a skilled tradesman would you give it to someone who shared your views and you thought was not a bad sort of guy, or would you go for someone of skill and experience who had demonstrated the ability to get the job done and done well? I think that we both know the answer to that one.  However, Owen Smith does offer the opportunity of a younger mind and a fresh face within the Labour Party capable of intellectually holding his own in opposition and I believe government, and sharing many of Corbyn’s and indeed my own political beliefs. He has also shown political courage and that indefinable quality (you know it when you see it) of leadership in standing in this election. So I will cast my vote for Owen Smith.  Jeremy Corbyn: ‘You Cannot Be Serious’.