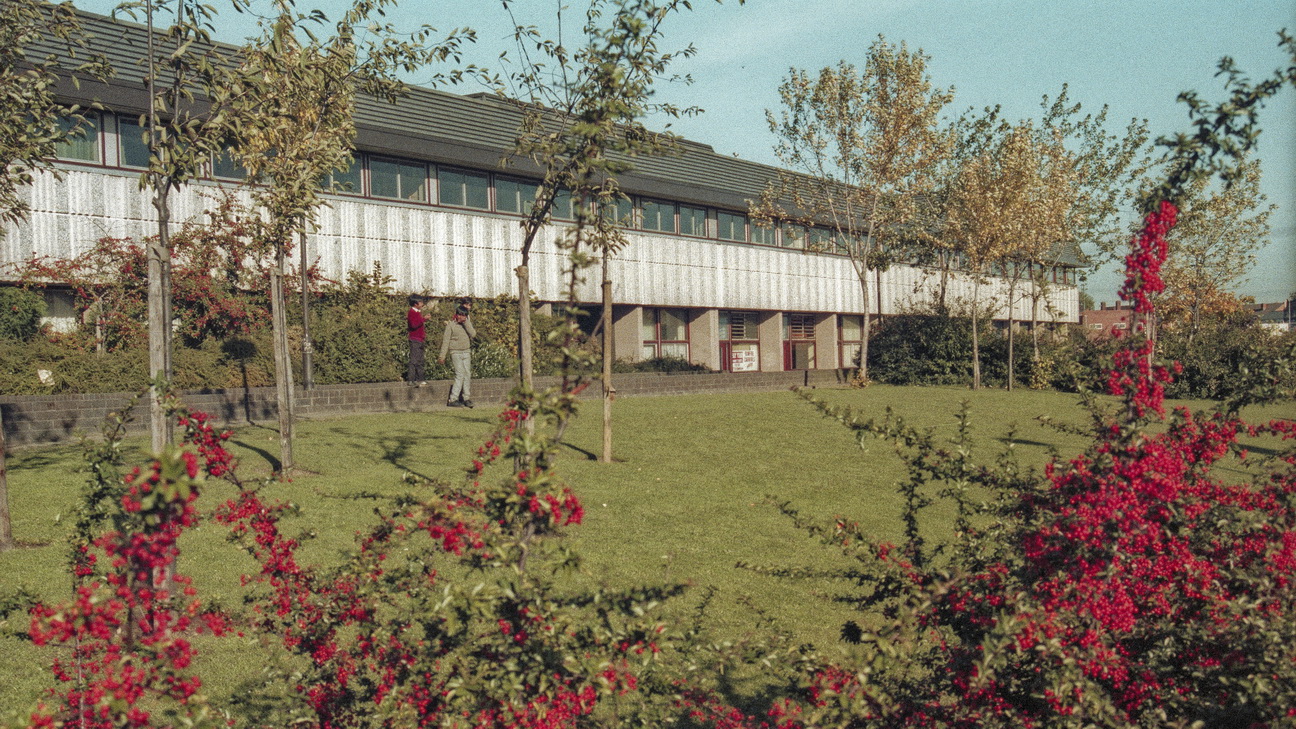 Just the other day, while engaged in a clean-up, I came across a re-print from the Architect’s Journal from early 1979. The reprint was approved by the Architects Journal for use at the official opening ceremony for the Small Heath School and Community Centre by the Lord Mayor of Birmingham and the Chairman of the Birmingham education Committee.

I had only a few weeks back been looking into some of the developments of certain projects in the States and how their gestation had changed over time, so it occurred to me that it would be of interest to see just how some of my old projects had fared over a not dissimilar period. In setting these thoughts out I should probably start with an apology as, with hindsight, given the apparent change in the nature of the philosophy surrounding this particular project over the years, I should probably have acquainted myself with the situation at a much earlier date. 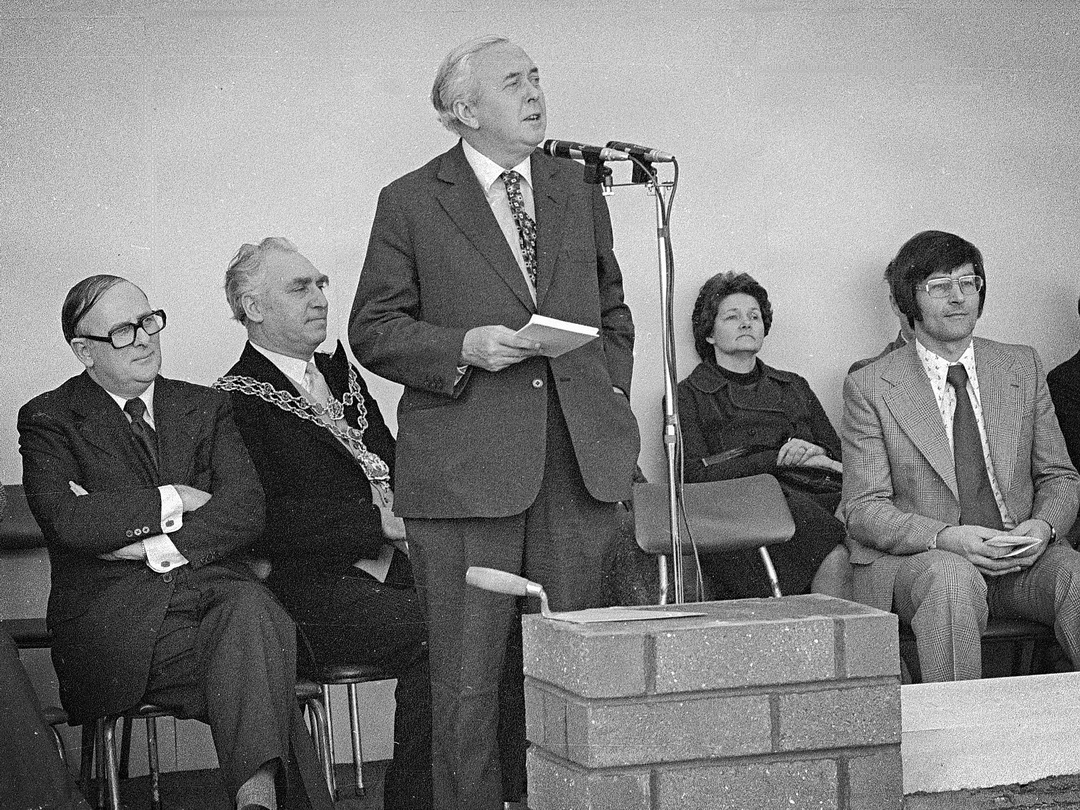 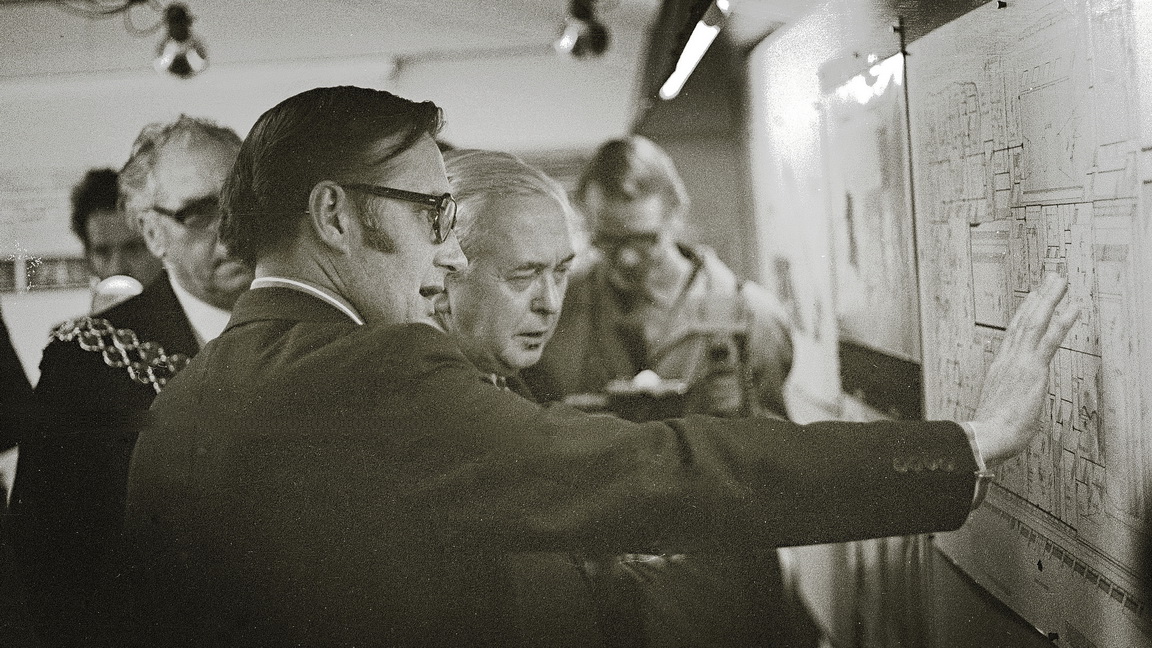 Then City Architect Bill Reed points out features of the project to Prime Minister, Harold Wilson.

There is always an ebb and a flow in education philosophy as there is in any discipline. Just at the time that the brief for the Small Heath project was being put together, incorporating shared functions in a single project thus achieving cost benefits while adding to the community spirit appeared obvious to most independent observers.

In the early seventies Birmingham found that within the Small Heath area a number of buildings, but principally a public swimming bath and a branch library required replacement. Up until that time the concept of buildings designed for shared use (school or otherwise) had not been pursued on a large scale within the city. A brief for a three-form entry first phase of ultimately a six – form entry school was already under preparation. As a result of much discussion, collaboration and sometimes persuasion, therefore it was not long before the idea to embody all of these buildings in a common project on one campus was accepted. At a later stage a decision was taken to include a community centre, a youth centre and a crèche. These additions meant that Birmingham was faced with its first genuine multi-use building on a large scale.

The juxtaposition of so many elements in one envelope required changed attitudes at all levels, not least among those involved in the briefing for educational facilities. The limited site area available for all of these facilities each requiring specific external areas further added to the pressure for a solution utilising joint-use within a single envelope designed to accommodate a multi-function concept. That this would provide flexibility for future planning exercises and therefore cost benefits was not lost on the architects.

A careful analysis of the functions and space requirements of what was becoming a complex project led to the choice of a modular approach employing a tartan grid with 5.2 metres structural bays. Service modules were located at regular intervals throughout the building allowing the provision of; toilets, drainage, water and electricity supplies, etc. as well as  effectively making the building future proof (broadband for example).
Such basic components brought about an adaptability and unity in a scheme, which by its nature could have been a series of disparate parts and it was not long before the merits of employing this technique found its way into the briefing for other similar building types within the city.
There is though, in my view, one obvious prerequisite for a successful project built along these lines and that is that the control of the project is vested in one organisation. It would be difficult to see how a multiplicity of such varied projects could work given the space constraints of a limited site together with the separate interests of each individual project. In reality the scheme as it stood underscores the validity of the community school concept supported by a central facilities function.

As so often happened in local authority employment in those days I left the Birmingham Authority for another post and lost touch with developments within the authority and the major education projects that I had given so much of my time and career to. However, having revisited briefly those projects (in virtual terms) I am struck by the changes that time has wrought on the buildings concerned. On the one hand it is perfectly possible to say that in physical terms there has been absolutely minimal change to the buildings (particularly the Small Heath project), while on the other hand so far as management of the components of the project is concerned the change has been, as I read it, “radical”.

Perhaps the change in political administration of the authority that I have already referred to brought with it some inevitable diminution of the original “community” concept and with it a loss of the excitement and enthusiasm that the concept engendered at all levels of the authority. Clearly in management terms things have radically changed over the years and the question that I have to ask myself is “was the Community School Concept” given a fair chance? While the external envelope of the building has changed not at all, external signage fixed to the side of the building’s concrete cladding proudly announces itself as; “The Small Heath Leadership Academy”, the leisure function is now “The Small Heath Wellbeing Centre” and the Library remains “The Small Heath Library”. The school having earlier been known as a “specialist technology centre” since 1994.

That the project would lend itself to modification was evident at the early stages. Indeed it was one of the reasons why the modular approach was agreed as I have already explained. The Architect’s Journal piece on the school drew attention to the impact of continuous cost saving exercises throughout the design stages as a consequence of the then economic climate created by the inflation in World oil prices requiring a reduction in the overall area of one structural bay at two levels as well as the loss of a number of key design features such as the Design Centre and the central Drama Theatre, with the Science Accommodation at upper floor level being built in shell form only. When, within weeks, the final tenders were returned they showed a massive saving on the in-house quantity surveyors estimated cost figure. This only served to highlight the severity of the cuts and the unpredictability of the economic climate.
All of the requirements omitted at tender stage were ultimately added back in with no additional cost to the project as a whole, but some critical space within the main body of the building could not be replaced meaning that there was a commensurate loss of breathing space in what was to be a heavily used building.

When the building finally came into use there was general agreement that, given the national economic situation the project overall had met all of its targets and the building and community school concept had every chance of success. 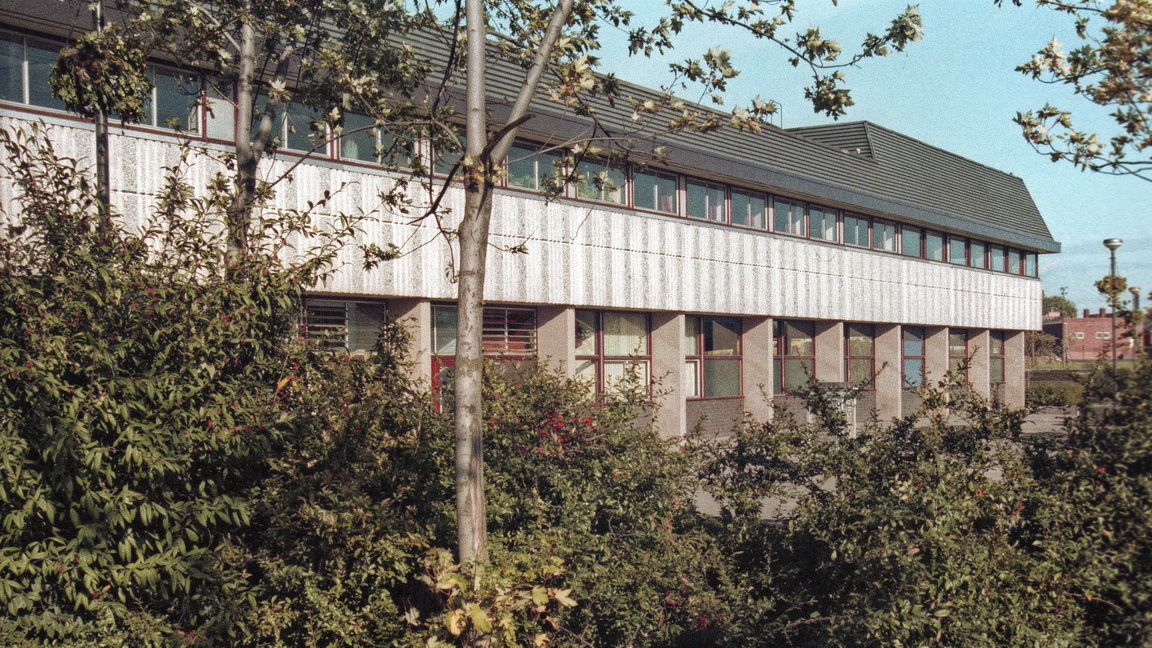 The Leisure Centre now re-branded as the Well-being Centre 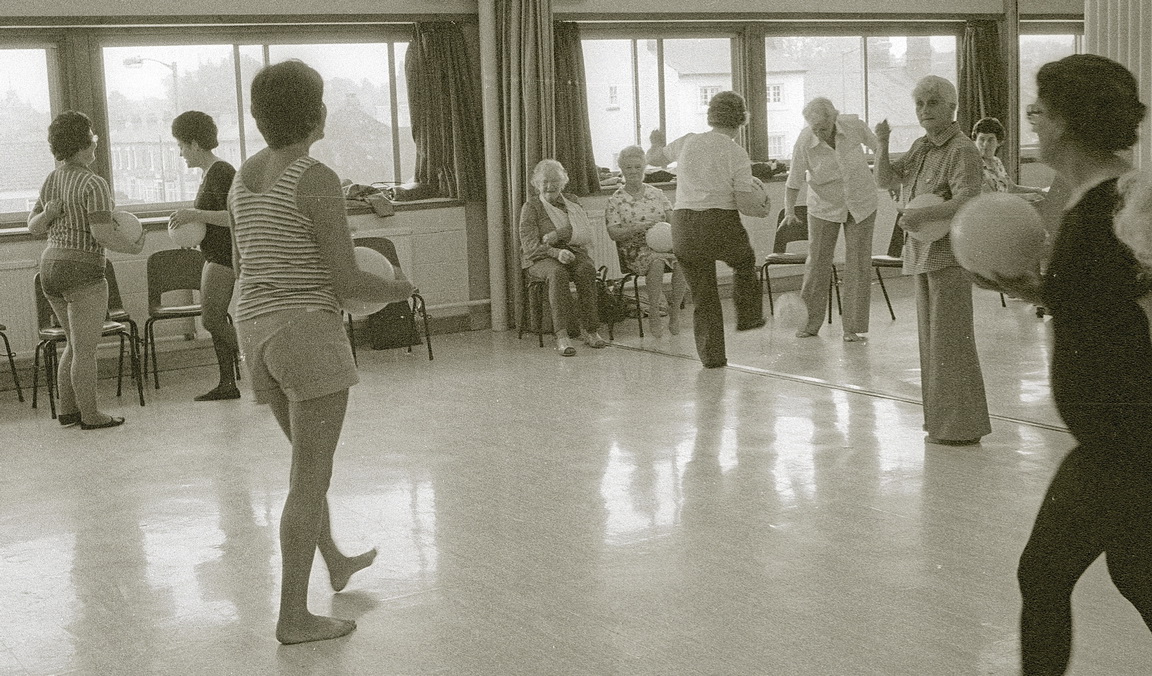 Fitness classes for the elderly 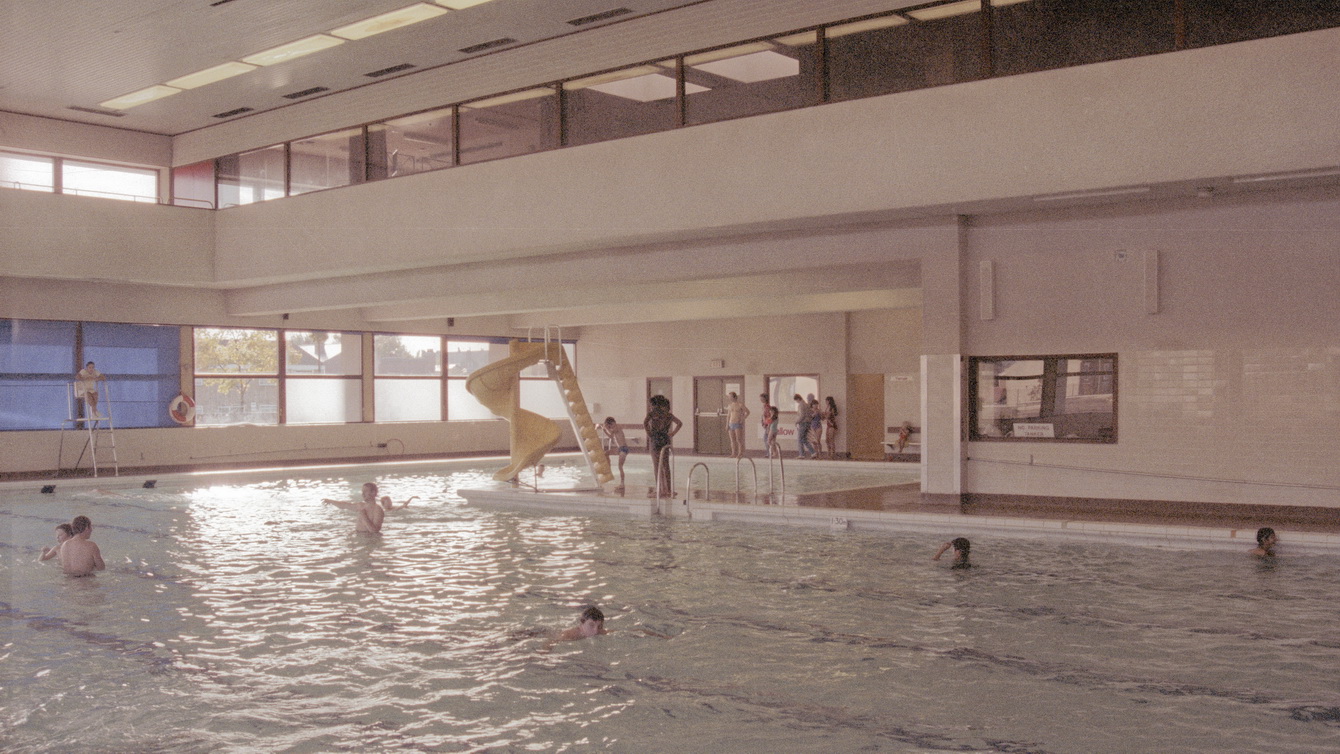 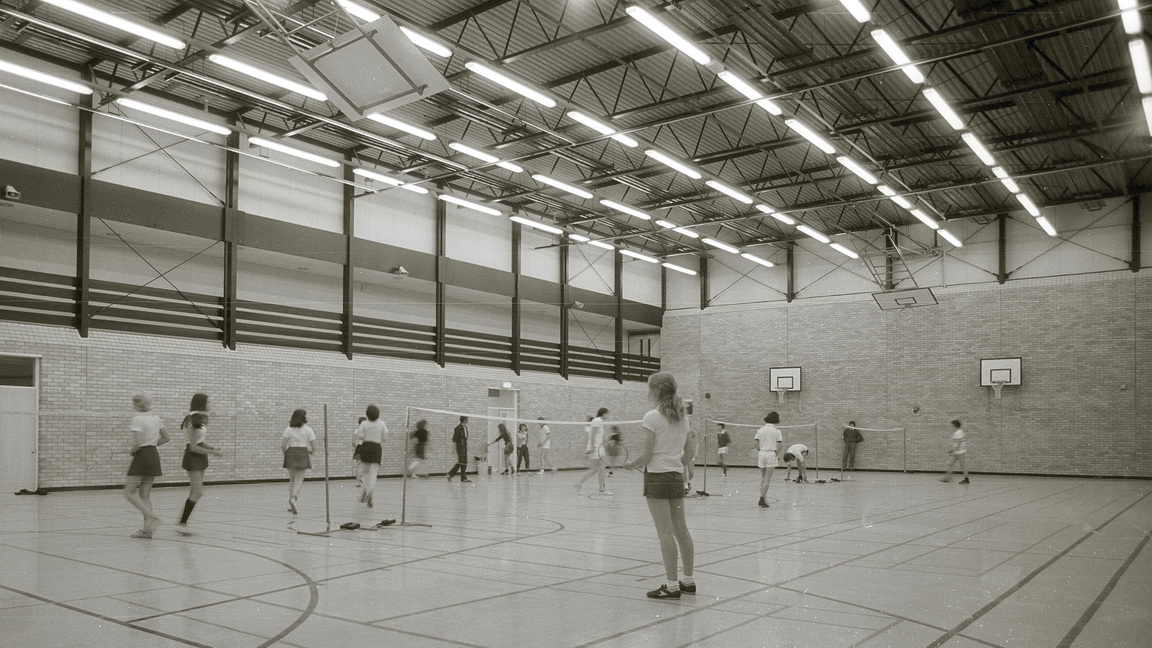 It surprises me now therefore to see to what extent the concept behind the project has changed over the years. I have to admit to a very obvious loyalty to the community school principle as indeed you would expect, but I was hardly alone in that loyalty and I wonder to what extent the general goodwill of the staff and client agencies was supported, and indeed just what happened?

Examining the expansion of academies, in 2014 the Guardian drew attention to the fact that, although introduced by Labour in 2000, this model was massively expanded by the Conservative-Lib Dem coalition with financial incentives offered if the local authority agreed to the academisation process. In May 2010, when the coalition took power, there were 203 academies in England; by November 2013, there were 3,444.
While the then education secretary Michael Gove celebrated the notion of schools being “freed” from the meddling of local government, the rapid expansion of the academies programme meant that ultimate responsibility for thousands of schools suddenly shifted from local authorities to the Department for Education.
In March 2015 Birmingham Live reported; the Birmingham National Union of Teachers General Secretary as saying: “Teachers reject the notion that turning the school into an academy is the answer. We call on the local authority to provide the necessary support to the school to be outstanding once again. For it to wash its hands of what has previously been a jewel in the crown of education provision in Birmingham by failing to oppose academisation would be totally unacceptable.”
Nevertheless the upshot of the situation as I write is that Smallheath School is now “the Small Heath Leadership Academy Trust” one of the stable of “Star Academies”.

It is probably a little too early to comment on the success or otherwise of the new academy. At the moment official results published indicate average statistics and certainly over the years it can be expected that change will inevitably take place in most disciplines. The question is rather to what extent it was necessary in the case of Small Heath, whether the community school philosophy was given a fair wind and to what extent crude politics played a part in this. Interesting also to note that the big name “public schools” (actually private schools) never require or experience such a re-branding exercise. Perhaps because the commodity they are providing is as much privilege as education and parents are happy to pay up for that. It remains also the case that even though the school element may be effectively privatised it does not preclude entirely the provision of a community school. Nevertheless, to operate fully and successfully as a community school in the manner as described by the “Coalition for Community Schools” (see below), the facilities management should ideally be controlled by the local authority concerned.

What is intriguing to me though, is that the existing buildings at Small Heath have lent themselves to modification at this stage of their life as they did during the original conception stage which speaks well for the original modular philosophy behind the buildings construction.
It remains to be seen whether the present project is simply a rebranding exercise with the school removed from the meddling local authority in the words of Michael Gove, or whether results ultimately will validate the decision. It is interesting to observe that the buildings having lent themselves readily to modification at all stages of their life cycle could readily do so again. We could yet have a genuine community school in Small Heath given a future change in government and local authority administration.

At the time of writing this blog, the Covid-19 pandemic has required an enforced lockdown, and in this situation many of us have discovered that those whom we can really trust are our immediate neighbours and our nearest and dearest. I am certain that when the time comes to attempt to return to “normal”, we will bitterly regret the folly of giving away the nation’s educational assets and the manner in which it has been done. Put simply, the decisions concerning the education  of our young are best made at grass roots level. 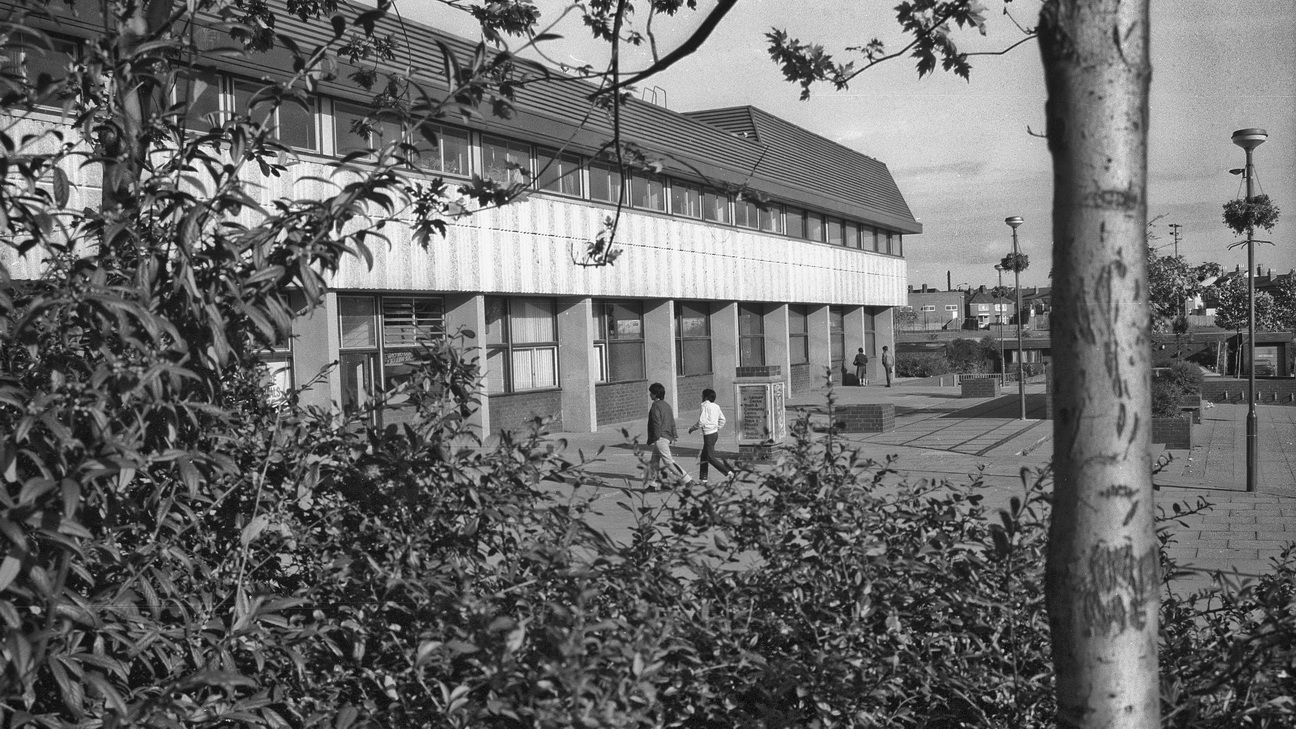 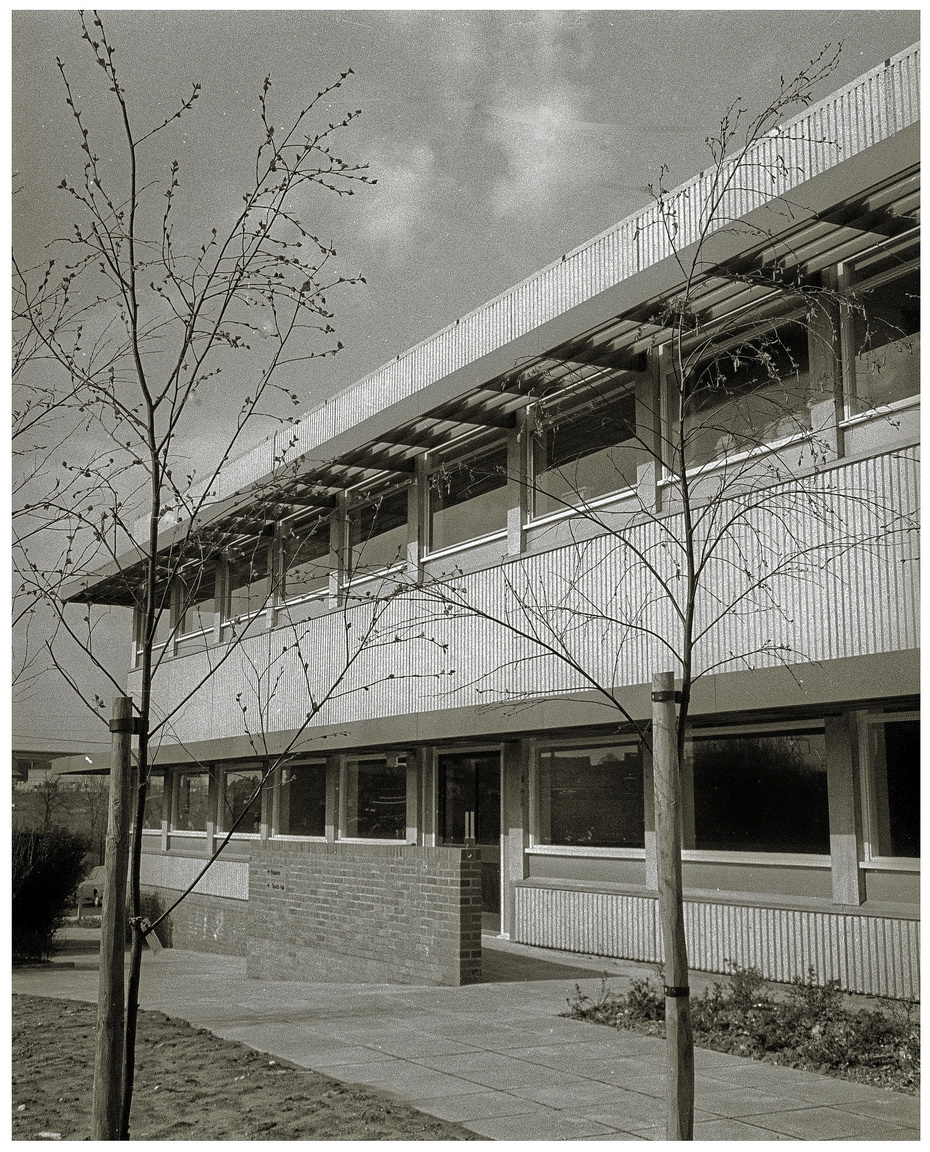 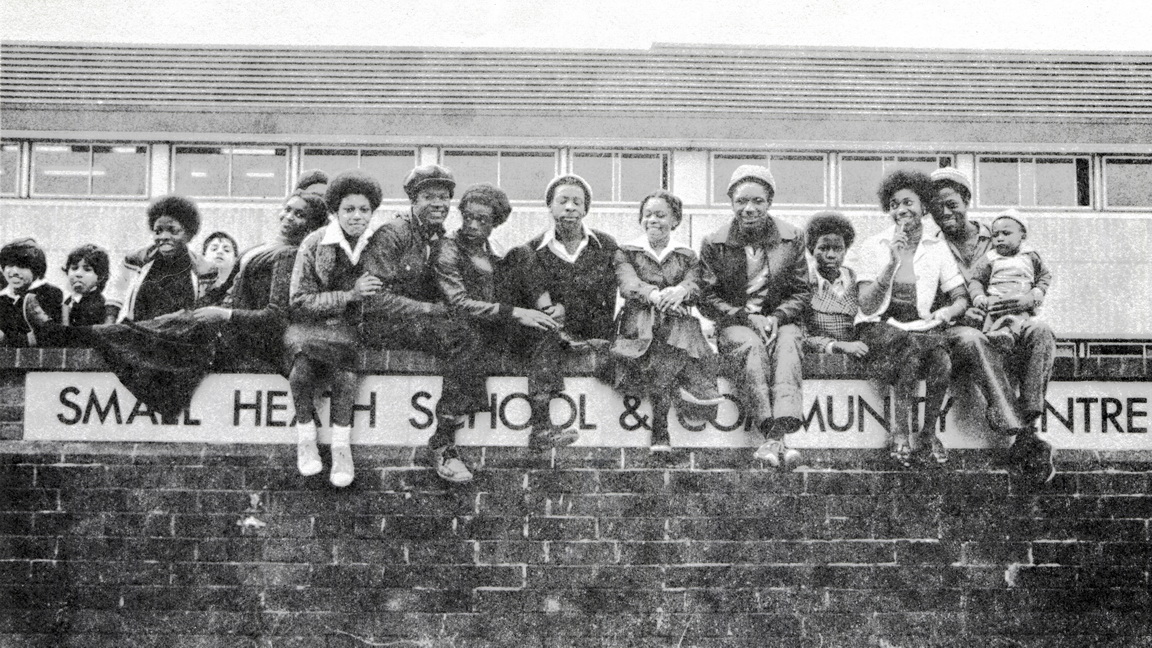 .Photographs taken by the author of this blog, “Steve Mitchell”

Coalition for Community Schools
A community school is both a place and a set of partnerships between the school and other community resources. Its integrated focus on academics, health and social services, youth and community development and community engagement leads to improved student learning, stronger families and healthier communities. Community schools offer a personalized curriculum that emphasizes real-world learning and community problem-solving. Schools become centres of the community and are open to everyone – all day, every day, evenings and weekends.
http://www.communityschools.org/aboutschools/what_is_a_community_school.aspx (a supportive organisation in the USA to promotte the philosophy behind the community school)