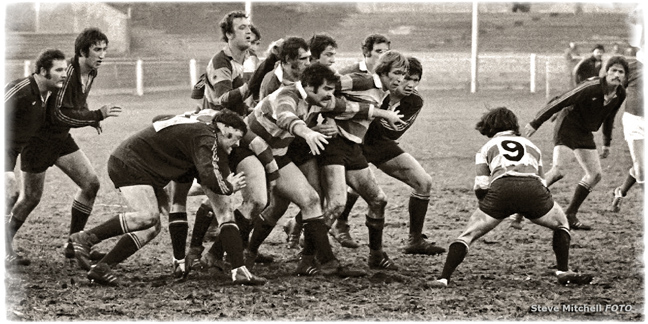 One way and another I have been involved in and around rugby for as long as I can remember, whether as a supporter, a reporter or a photographer, and yet my credentials as a ‘player’ are, well, non existent. But as all followers of Glos will know in their bones, that doesn’t make you immune from the bug.

But first an admission of my own experience attempting to play the sport. It all started to go wrong the first time I picked up that oddly shaped ball. I  suppose I must have been about seven years of age at the time and the ‘games’ teacher at Calton Road Junior must have thought it a good idea to give her class a feel for the game (we had previously only experienced the usual kick about football in the playground). Lesson number one focussed on scrummaging and the general idea that you then had to pick up the ball at some point and run with it with the objective of touching down beyond the goal line (we were playing on a football pitch). Well, I must have thought, I had the general idea and so when the ball popped out at the back of the scrum, naturally my seven year old self thought it was a great opportunity to pick it up and run with it, which I duly did. I was only tackled just as I was about to score under the posts. My tackler, one Dick Etheridge, went on to achieve a degree of prominence in the game of football, but he pointed out to me at the time in the way that schoolboys do. that I had been running in the wrong direction. But how was I to know! The teacher clearly thought such rudimentary things would be common knowledge among seven year old boys!

My second experience of playing rugby was at the Crypt Grammar School. I must have been about eleven years of age. And the Crypt being a ‘rugby’ school also appeared to share the ‘you learn by osmosis’ philosophy as once again I found myself in a scrum encounter, this time ‘martially led’ by the then games teacher one ‘Bill Keeble’. I use the military expression advisedly as I understand, or every one said, he was a retired sergeant major, and it tells you all you need to know about his ‘skills’ as a people person, but yet another who went on to achieve prominence later coaching the Gloucester team. It must have been a case of unruly players requiring a touch of military discipline. Anyway, aforesaid Mr Keeble must have thought I was by build a natural hooker, and with the minimum of advice ‘that means you hook the ball with your heels’ I was left to the mercy of just about everybody’s boots and it goes without saying that I got a right kicking. Seeing that this move wasn’t working out, I was then told to play at stand-off, meaning that I was then pretty well at the mercy of everyone, and they didn’t wait for me to receive the ball either. Later I was put on the wing where I could do no harm.

That the foregoing didn’t put me off the game and that I have since been in and around rugby over the years is probably testimony to that cry now made familiar by television of ‘Glawster, Glawster, Glawster‘. And as of course all followers of Gloucester rugby will know, it‘s a visceral thing that is in your bloodstream from an early age..

In my case and like many before me and since, I used to accompany various older relatives to matches at Kingsholm, and being little you very often get to see the match from the rails – still the best viewpoint I reckon. That way I had the thrilling experience of watching such then heroes as ‘Willie Jones’ the Freddy Burns of his day, only better as his talents became ever more mythical over time. I also saw the wartime internationals at Kingsholm and when Welsh supporters defied the police and climbed the posts to tie a leek to the top it was a highlight cheered by all. But most of all on a chill winter’s day, during Gloucester games when the cry went up from the supporters: ’Glawster, Glawster, Glawster’. How could anyone fail to be impressed. And remember in those days the support might have been under three thousand on the day, with a ground more obvious for its empty spaces than supporters (see photo above), but nevertheless a sound to bring tears of pride mixed with embarrassment from this youngster. The cry invariably welled up from the shed before being taken on by others. While the Balkan Sobranie element, knees covered by blankets against the cold in the stand smiled indulgently. Then, as now, a statement of defiance, a threat, a statement of pride: ‘We are Gloucester’. You enter Kingsholm at your peril!

From that time onwards there were frequent visits to Kingsholm, but as I grew older further education away from Gloucester meant that my Kingsholm afternoons were sporadic at best, but nevertheless I was able to witness some of Gloucester’s finest: Bill Hook,

Richard Mogg (uncapped but 510 games for Gloucester), John Watkins, Eric Stephens, Peter Butler, Mike Burton, and greatest of all Mike Teague, (Teague’s grandson, Rory, is currently captain of the Counties side). On one special day I had a privileged seat in the stand at Cardiff when Teague, playing for England against Wales was taken out of the game from the kick-off by the oncoming Welsh. Carwyn James’s philosophy of ‘get your retaliation in first’ had clearly been taken to heart!

Later, when in semi-retirement we moved back nearer to Gloucester some nearly seventeen years ago, I was able to get to Kingsholm more often and in that period I was witness to the emergence of the professional game, which was not without some resistance at that time, as many supporters felt that Gloucester having once been a club proud to draw upon local players would inevitably be forced to look further afield as the professional game developed and that special character that Glos once possessed would be lost. In particular there was resentment that ‘their club’ could be owned by one man, Tom Walkinshaw. And as the professional era took grip many of those who had been pleased to devote their time and energies usually free of charge for the club began to feel that their efforts were not appreciated.

In hindsight now though, reading the minutes of the old Gloucester RFC Committee available on the Kingsholm Heritage site, it represents quite another age that could never have provided the basis for the club and the successful business that Gloucester RFC has become today. But Gloucester’s supporters demand success, which in any case is essential if the club is to flourish in a commercial environment, and over the years Gloucester have got through quite a few coaches in pursuit of that success: Richard Hill, Philippe Saint-André, Nigel Melville, Dean Ryan, Brian Redpath and now Nigel Davies. But for me when Saint-André was Gloucester’s Coach there was an unforgettable, almost continental, atmosphere at and around Kingsholm with the Marseillaise sporadically volunteered before matches with a distinct Gloucestershire accent and Kings Square awash with cherry and white outside the pubs and cafes. But there is no doubt that being Gloucester’s Coach is a high pressure position as Philippe Saint-André admitted to me after stepping down when I remarked on how well he looked, ‘I’m not under stress now’ he said. Well Saint-André has moved onward and upwards, and while Gloucester have achieved much success over the years and are poised for further achievements, it is fair to say that they have not, maybe could never, meet the the expectations of their supporters. But what is clear is that the old nine man game that was the club’s forte and the despair of the critics at one time, has changed beyond all recognition and Gloucester is now recognised by the pundits as being perhaps the most entertaining club side in the Aviva Premiership when they are on song.

Over the years I have seen more that my fair share of rugby at all levels, having photographed the game at International and Club level as well as becoming the first regular reporter on Women’s Rugby, and the England Women’s Team is still our best bet as World Cup Winners in 2014 (they beat the present World Cup Holders, New Zealand by three matches to nil on their recent tour of England.

I haven’t been to Kingsholm for some while now, but Gloucester is still my club and if I am unable to catch a game on TV, I always look for Glos first on a Saturday as the rugby results come in to see how they have got on, and there am I thinking quietly to myself, ‘come on Glos’.

Follow this link for a slideshow of just a small selection of Gloucester images from the rugbymatters.net archive taken over the years