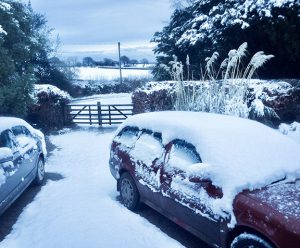 A couple of days ago, I attempted to celebrate the apparent end of the very heavy period of snow where we live by venturing in the family car to observe the wonders of nature. Instead I found myself seeing the world from a different viewpoint from somewhere on my back as I lost traction in the ice on our driveway. Don’t laugh. It could happen to anyone. It did however give me an insight into the kindness of neighbours and into the workings of our NHS at close quarters.

Happily our immediate neighbours are two hard-working NHS practitioners and within two or three minutes they had carried me bodily up the drive and steps of our bungalow, deposited me gently on my own bed and carried out what amounted to a triage procedure before announcing they thought that any fracture was unlikely but that I should refer the position to our doctor ( a different practice) who would take it from there. This I duly did the very next morning to find myself within an hour of my emergency ambulance call once more observing the wonders of our winter scenery from a prone position on a stretcher in the back of a brand new ambulance as it proceeded to the nearest NHS Hospital.

Now I won’t pretend that henceforth everything went as smoothly as I would have wished: everywhere there were signs of pressure and staff numbers and space being less than ideal. But within some eight to nine hours and in spite of clear evidence of strain in staff numbers I had been given all of the normal checks with compassion and humour to determine whether I would require further treatment in-house or could be discharged home and to our family doctor. Happily the hospital agreed to my being discharged the same day and that henceforward I would be treated as an out-patient. Although this story is personal to me it is a tale which I am quite sure could be replicated up and down the country illustrating the flexibility and diversity of our NHS in-spite of undoubted hostile governmental financial and political pressures.

The triage procedure being initiated from within the corridor within an allocated ‘corridor team’, before an available cubicle could be found

Charlotte the young duty nurse, complete with Russian boyfriend, is a temporary agency appointment and had commuted from the Bristol area.

Both X-Ray radiographer technicians were Italian and with a charming resemblance to “The Young Inspector Montalbano” and his Sicilian girlfriend (no not Livia). I think that I must have been taking the part of Catarella!

The doctor on duty attending me was the excellent Vera from Estonia.

Everywhere clear evidence of diligence, application, and compassion allied with humour such that when we eventually were allowed home we were all of the clear understanding that we had benefited from the very best medical professional support service that could have been provided in such circumstances. Any plaudits that flow from these comments flow very much from the dedication of the staff concerned and most definitely not from the actions of a government who have allowed our NHS to become such a fragmented and piecemeal operation.

In the past I have not hesitated to draw political conclusions from any subject that I might choose to debate, but here is one case where I would have to say that I have no idea what, if any, political allegiance that any person in this story might hold, and nor does it matter, because from that of our kindly neighbours to every single professional that we encountered along the way, in the way in which they instinctively did all that they could to help that is really the only thing that matters. But to those wedded to Brexit: beware, you might find yourself dependent upon the compassion and good heart of your European neighbours rather earlier than  you might wish!