Some days ago I posted an entry about a nasty fall that I had and my subsequent experience with the NHS. All largely complimentary to the hard-working NHS support staff and Hereford (Wye Valley Trust) Hospital. In many ways it’s a pity that the feel-good  story couldn’t just be left at that. But the long and the short of it was that my visit to A&E led up to a couple of X-Rays that showed no fracture and I was released back to my GP on that basis.

For me the problems then began for as everyone knows sometimes soft tissue injuries can be as difficult to resolve and problematic as fractures. As I write we have now reached twelve whole days with NO indication of either any physio-therapy advice or occupational therapy. Please bear in mind that I am referring here to home visits as I have no way in which I would be able to make a private visit to a National Health centre, even if  such an option was available to me. In all of that time, other than my very supportive family, the hero for me has been a little Zimmer frame that provides my only mobility. And sometimes you just don’t get there in time, if you follow me! I have, in the absence of appropriate medical advice tried various options, Norwegian Ski-Poles, walking sticks, etc. But all to no avail! My attempt to visit the shower just the other day nearly led to a further accident, when I was only saved by my daughter just in the nick of time. So much for modesty!

There was just a flash of hope last Friday (a full week ago) when I received a call from someone speaking for my doctor who advised me that he was arranging a home-visit by a physio-therapist. Just what the doctor ordered, I reflected, but since then ‘nothing’.

There is a particular problem in my case and it relates to the NHS centres of treatment and the availability of family doctors. The nearest medium size community with a medical practitioner is some five miles away, Monmouth. And is in Wales, and yet we live in Herefordshire and when phoning for an ambulance we are serviced by NHS ambulances from the Hereford Wye Valley Trust Hospital. This hospital is both the  nearest, and given the appalling snow conditions when we were advised to call the ambulance by our ‘Welsh’ doctor, the safest and most direct! For this reason, there is always the possibility that your case can ‘slip between the cracks’ of the two NHS services. Believe me, it doesn’t help to hear the Prime Minister berate the Health Service in Wales in her attempts to justify the many political and managerial failings of the NHS in England. As you can imagine it can lead to a defensive approach from staff when a patient who is affected this way makes contact. And make contact I have. And for every initial and promising opening then has followed the inevitable, ‘why don’t you try this number’! And so we go down yet another route only to be referred to another website, helpline, named service: whatever!

It has occurred to me, that this is all part of a Blackadder type ‘cunning plan’! And that the body mends itself anyway, so Patient, just wait it out! But that would be just too cynical and conceding an intelligence to politicians where no intelligence exists! I do however suspect that an apparently sympathetic voice on a telephone is less costly to provide than that of dedicated professionals. With the upshot that things fall by the wayside or get kicked into touch. “Kicked into touch”. Now I’m back on familiar territory, for me ‘Rugby’. After all I publish the occasional rugby photo and article. But as ‘The Speaker’ might say, I do that from a sedentary position. Playing days are long over: don’t think twenty-eight, but rather reverse those two numbers. And, believe me the ageing process does not make for an easier mending process. Quite the opposite. In fact the sooner you can be put into touch with a physio, the better your chances are for a reasonable recovery. But as I say, twelve days and still waiting!

The difficulty that I have is that I really do not see why there should be a problem with the onward referral process, regardless of ‘border difficulties. This must have happened before and there must be a simple direct solution. A piece of paper with a name, a phone number, and how you will benefit and the treatment you will receive. With copies to the other party. You should have this ‘in your hand’ prior to leaving A&E. It’s not rocket science is it! I do rather suspect though, that like our teachers, NHS staff are brought to the borders of nervous breakdowns by constant unsympathetic political tinkering and over-management. And of course all of this onward referral process could and should be managed from within one central organisational structure. That way at least there would be fewer cracks to fall down. There are many somewhere to the right of where I instinctively stand who do speak genuinely and with some emotion of their love for the NHS and how they can be trusted to take care of it. And I believe them, and they do mean it. However I think that they are seeing the situation through the wrong lenses and just do not have in their DNA the capability to address the many problems of a holistic community service, and are thus doomed to fail. I have no doubt that we need urgently to put our National Health Service into the hands of the breed of politicians and party who brought it into being in the first place. Modern-day Clem Attlee, Nye Bevan, step forward: ‘Your Country Needs You’! 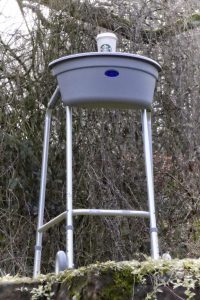