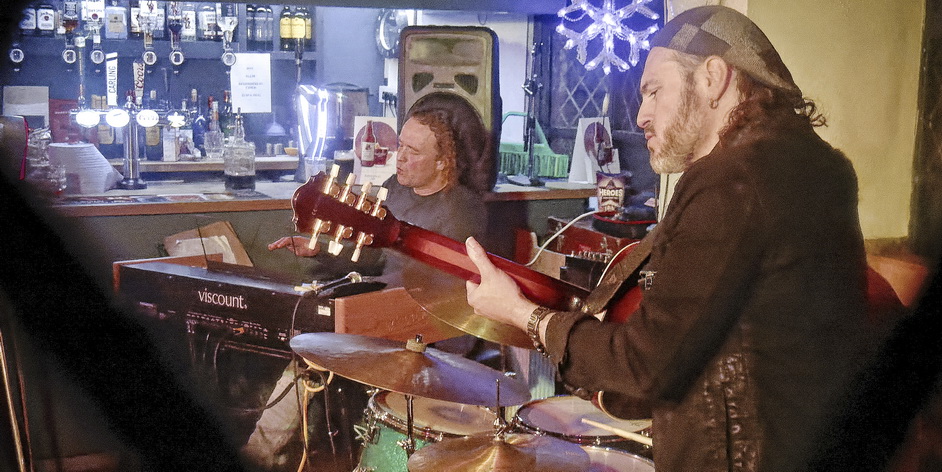 World-class Music for the Price of a Pint 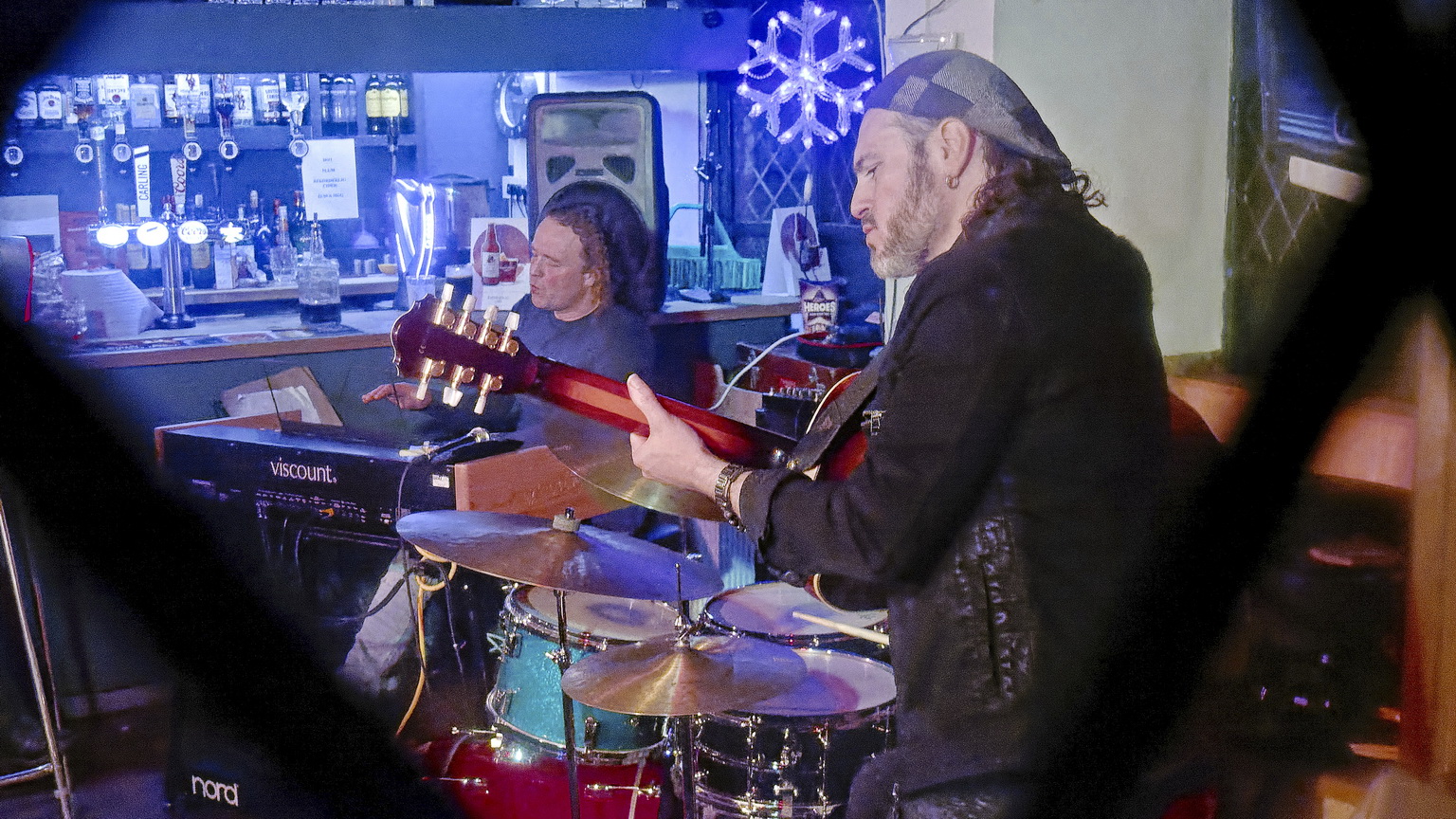 The British pub has long fulfilled an important role in community life often filling a gap that others were unable to fill. Its very survival has often depended upon it, both as a venue for the occasional solitary drinker and also as a communal setting of a more convivial kind. In the latter case as often as not there would be a role for music, pub games or entertainment of one kind or another. Indeed, its very flexibility may have been key to its relative success. In that respect it is worth looking back into the not so distant past to see just how “The Pub” responded to the roles that society may have thrust upon it.

Music as a commodity is now available in many forms and provides a ubiquitous background to many of our activities. It was not always so, and prior to the present onslaught of new technology, music had to be appreciated wherever it could be found. And in many cases that would be in a pub location with the music often being provided less by performers than the drinking (and singing) public. In particular, the traditional pub would be the gathering-place for a community looking for reassurance and finding that reassurance in community voice. Over the period of World War Two that would have been be particularly so, and with many youngsters “away at the war” those who kept the home fires burning would seek consolation in music and one another’s company. In many ways that may well have been the highpoint for the Pub as an institution and oddly perhaps, at that time, the two quintessential pub songs of the period: “Roll out the Barrel” and “Lili Marlene” owed their origins in the case of “Roll out the Barrel” to a Hollywood film production featuring Bing Crosby and the Andrews Sisters, although the original tune, had its origins in a Czechoslovakian tune, and in the case of Lili Marlene, a German popular song. (See Footnote)

Working with the Royal Air Force at that time, up to 1/2 million USAAF American airmen were stationed in Britain maintaining the fleets of aircraft needed to attack Germany’s cities and industry. The aim was to weaken Germany’s ability to fight which was a central part of the allied strategy for winning the war. Over 200 airfields were occupied or newly built by the USAAF. Each airfield housed many American men eager to be introduced to the British Pub (Have you got any gum chum?). And without the presence of American servicemen in Britain the war with Germany would probably have been lost. Britannia may well have ruled the waves but significantly needed Allied help to rule the skies!

The Pub not only played its part as a gathering point at that time but also shared in the wartime hazards, and any public houses situated in or near to key target areas such as the Docks at Gloucester would be perceived to be a target and as such liable to bombing by the Luftwaffe. With the consequence that you could easily find yourself engaged in a community sing-song one minute only to have to dash for an air-raid shelter the next when the familiar and blood-curdling alarm signal sounded (as a small boy at the time I speak from experience).

In the immediate post-war period location as ever was all, and other than passing trade the local pub, usually tied to a brewery, would have to offer something just a little different to compete. With pubs for the most part needing to cater for a largely pedestrian population there would be a number of pubs within walking or cycling distance. That period also saw the heyday of the traditional pub outing reinforcing the role of the pub as a de-facto unofficial community centre. 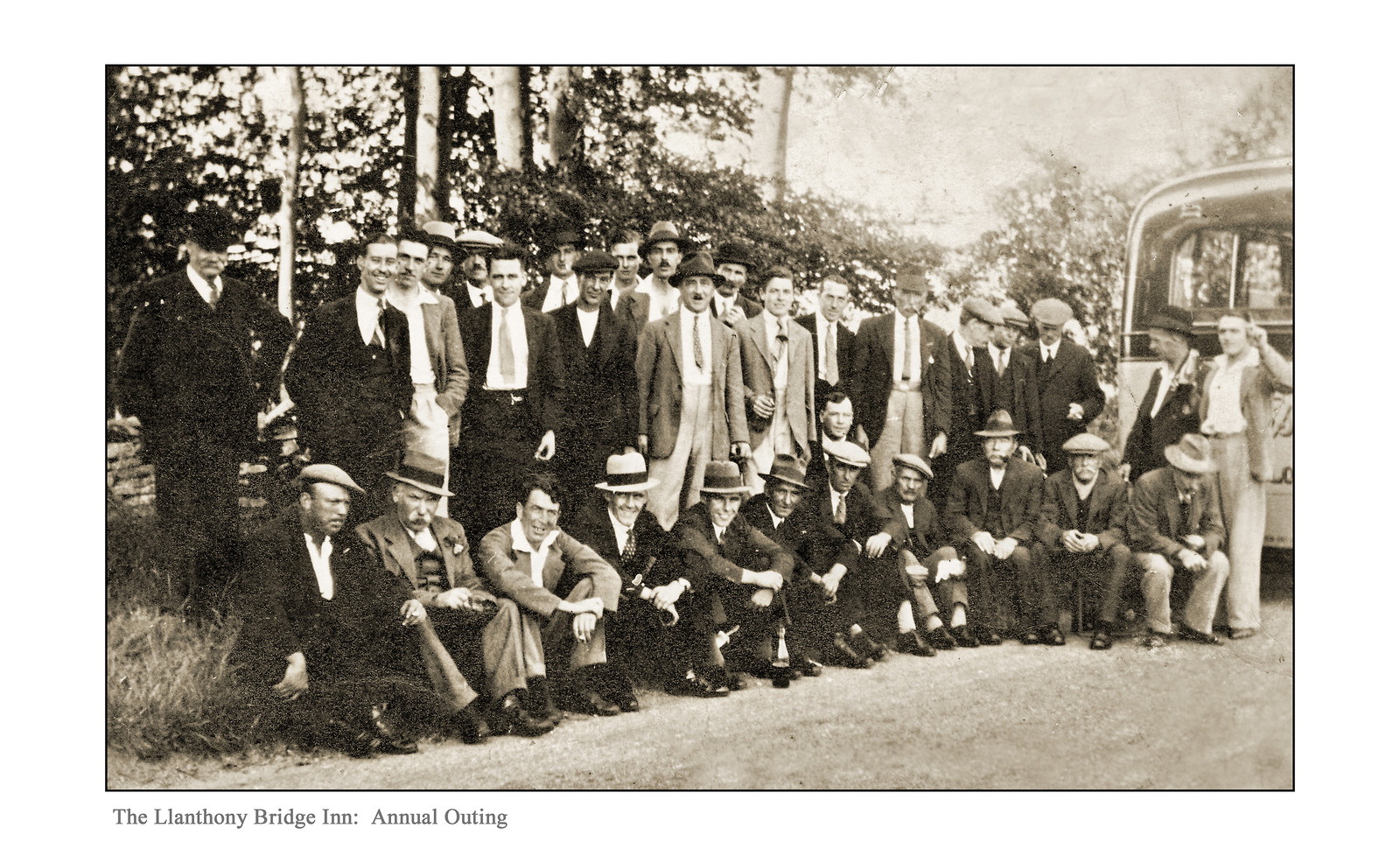 With almost universal access to the motor car there is little demand for the ‘local’ as such – and scenes like this in Ross-on-Wye are all too familiar. At the same time planning authorities are coming under pressure from developers to agree to the change of use to residential properties when pubs come up for sale as that is where the potential for profit is seen to be. 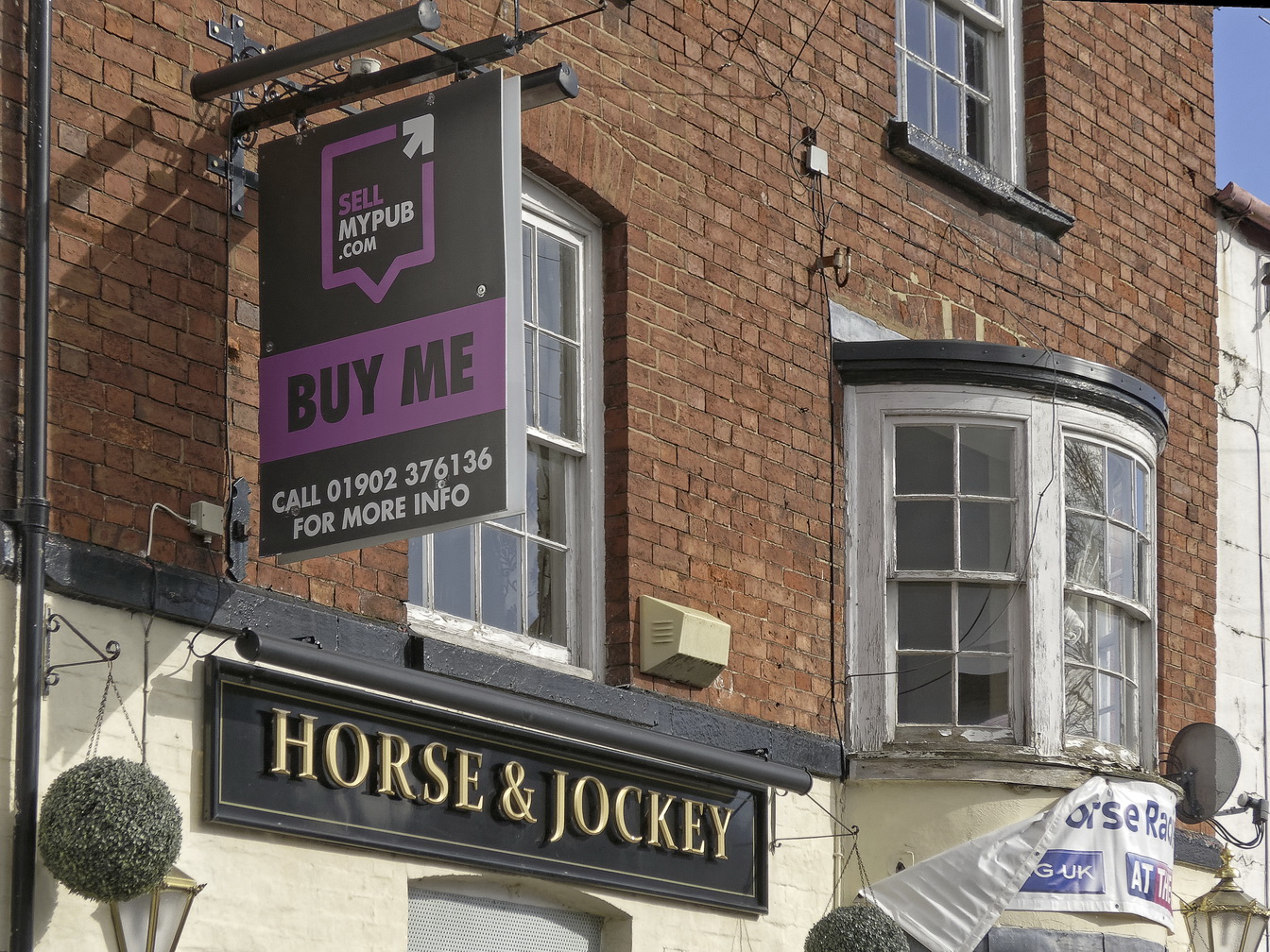 Sad but all to common sight in Ross-on-Wye

Given greater personal mobility and improving living standards, the demand for entertainment is likely to increase, and though ad-hoc self-entertainment is perhaps a thing of the past born out of unique times, the pub remains a ready venue for entertainers to find their audience; and, with popular music becoming accepted in schools pupils are able to choose to learn a musical instrument, follow their idols and join with others to form a small group. The more ambitious would then seek to perform in public before an audience, or indeed might be approached by an appreciative publican to provide entertainment. A happy coincidence that could lead to the rebirth of the pub as a venue, though during the eighties in the absence of suitable venues, Gloucester music-lovers called into use the Barge, Semington, which was a popular venue for a number of years. The barge has now suffered the sad fate of being scuppered away from Gloucester docks where it was originally situated.

The traditional British pub as an institution has often shown its resilience, prepared to bend with the wind and move with the times as necessary. The question now is; is it able to do so once more and, in what direction? Most communities of a reasonable size are able to boast a venue for local musicians, and more often than not that venue will be a popular local pub or cafe. Gloucester has its Café Rene in Greyfriars amongst others; while Hereford has the Lichfield Vaults and the Courtyard. Gloucester however has a population of some 150,000, and Hereford about 60,000. Monmouth’s population is approaching 12,000 yet it has its own active music scene and annual music festival.

The boast at Monmouth’s Queen’s Head Inn is that they are able to provide “World Class Music for the Price of a Pint of Beer”. Which though it may help to explain the development of the pub as a successful music venue, does not explain the signal success of the Queen’s Head in such a relatively small community as Monmouth. To explain that it is necessary to dig a little deeper and in doing so certain individuals stand out. They are principally the owner and publican, Neil Bell, as well as Lyndon Owen and Caractacus Downes, who also operate under various titles as: Eira-Snow, The Coltrane Dedication, and are additionally the driving force behind “Music in Monmouth”. 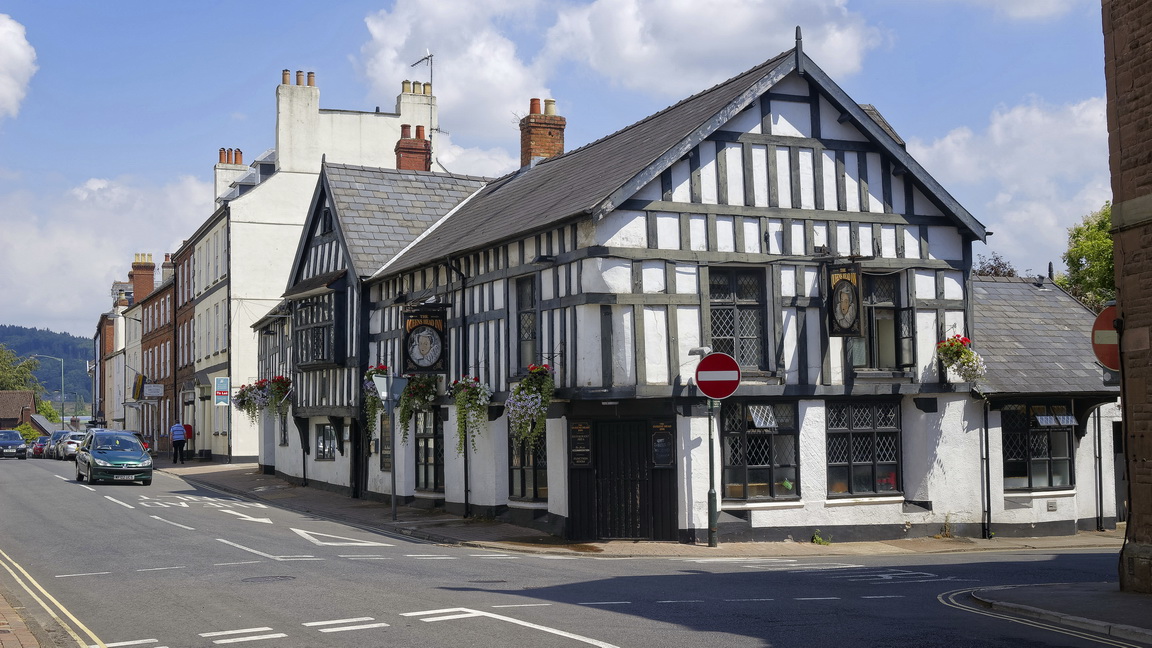 The building itself is a Grade II listed building (27 June 1952) and dates back to around the Sixteenth Century. Original ornate plaster ceilings dating from the 17th-century can still be seen near the bar. Having undergone many changes since it was first built, the pub’s original stone was plastered over and re-clad with the profile of the building also altered by the removal of gables and the addition of  mock black and white wood work added in 1922 to provide today’s distinctive appearance.

The pub itself is reputed to have a colourful history with alleged hiding places which were often needed to be put to use. It is said that during the Civil War, Oliver Cromwell stayed at the Queens Head on a number of occasions, and on one such occasion an attempt was made on his life, with the would-be assassin being chased into the bar and shot.

This didn’t deter a group of local business people who in 2005 took over the pub with the aim of ‘making the Queens a community pub offering live music and even a small library and welcoming all, such that patrons nowadays regardless of affiliation, political and otherwise, can expect the warmest of welcomes.’

In May 2013 the present landlord and one of the original consortium, Neil Bell, purchased the Queens Head Pub from the consortium and instituted a full renovation careful to ensure that the ethos of the Pub remained the same thereby ‘ensuring that the Queens remained a welcoming pub for all‘ offering a relaxed ambience, while continuing to support live music 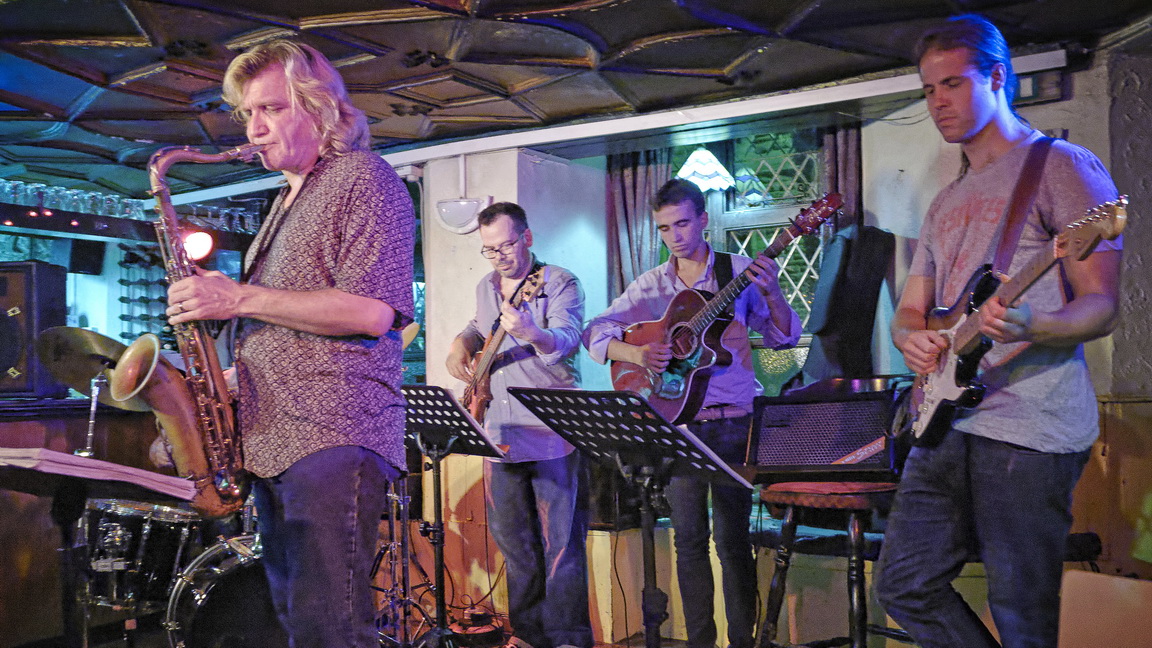 Formed in 2005, “Music in Monmouth” is a community arts group with a mission to bring new, original music events to the widest possible audience in Monmouthshire. It’s major purpose is to present the arts, particularly music, which is outside most people’s listening experience at an affordable price, usually free, so that people have a chance to experience a much wider spectrum of musical experiences which is both artistically enhancing and educates a future audience; breaking away from ‘I know what I like’. “Music in Monmouth” is generally self-funding but additionally enjoys support from local philanthropists from time to time. 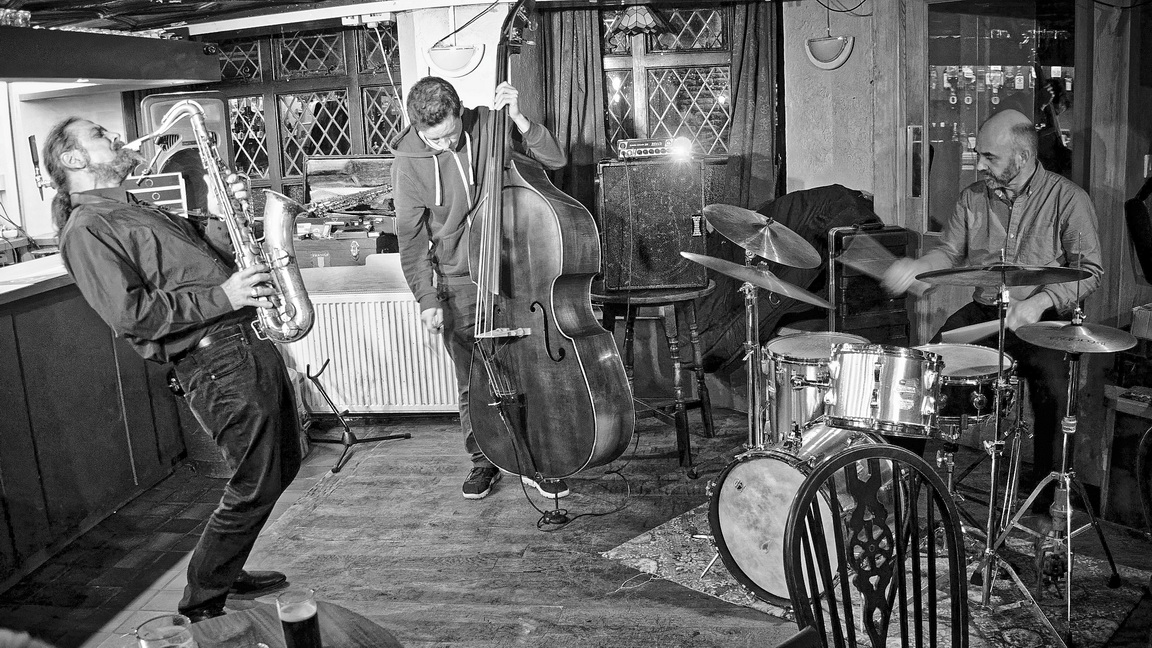 Since its formation Music in Monmouth have achieved an international reputation hosting many events with renowned players from USA, Sweden, Norway, Australia, Spain, Switzerland, Faroe Islands, Germany, and Ireland. In the UK Monmouth is a ‘must play’ town for many leading players in the avant-garde and experimental music scenes, often providing the first step in establishing national tours. The main venue is, as often as not, the Queens Head Inn, where they have hosted approximately one major event a month for the past 14 years and are now able to boast that, in Monmouth at least, there is an opportunity for anyone to walk into a pub and be faced with world class, original, alternative music. And Yes, all for the price of a pint of beer.

So, for Monmouth it may be said that the formula works, but elsewhere the key ingredients of a sympathetic and dedicated publican together with talented and supportive personnel may need to vary to accommodate the specific needs of the community and listening public. Nothing is ever easy in pub management. But what is certain is that the British Pub as an institution will find a way to survive and flourish. Now, if you will exuse me I’m off for a pint! 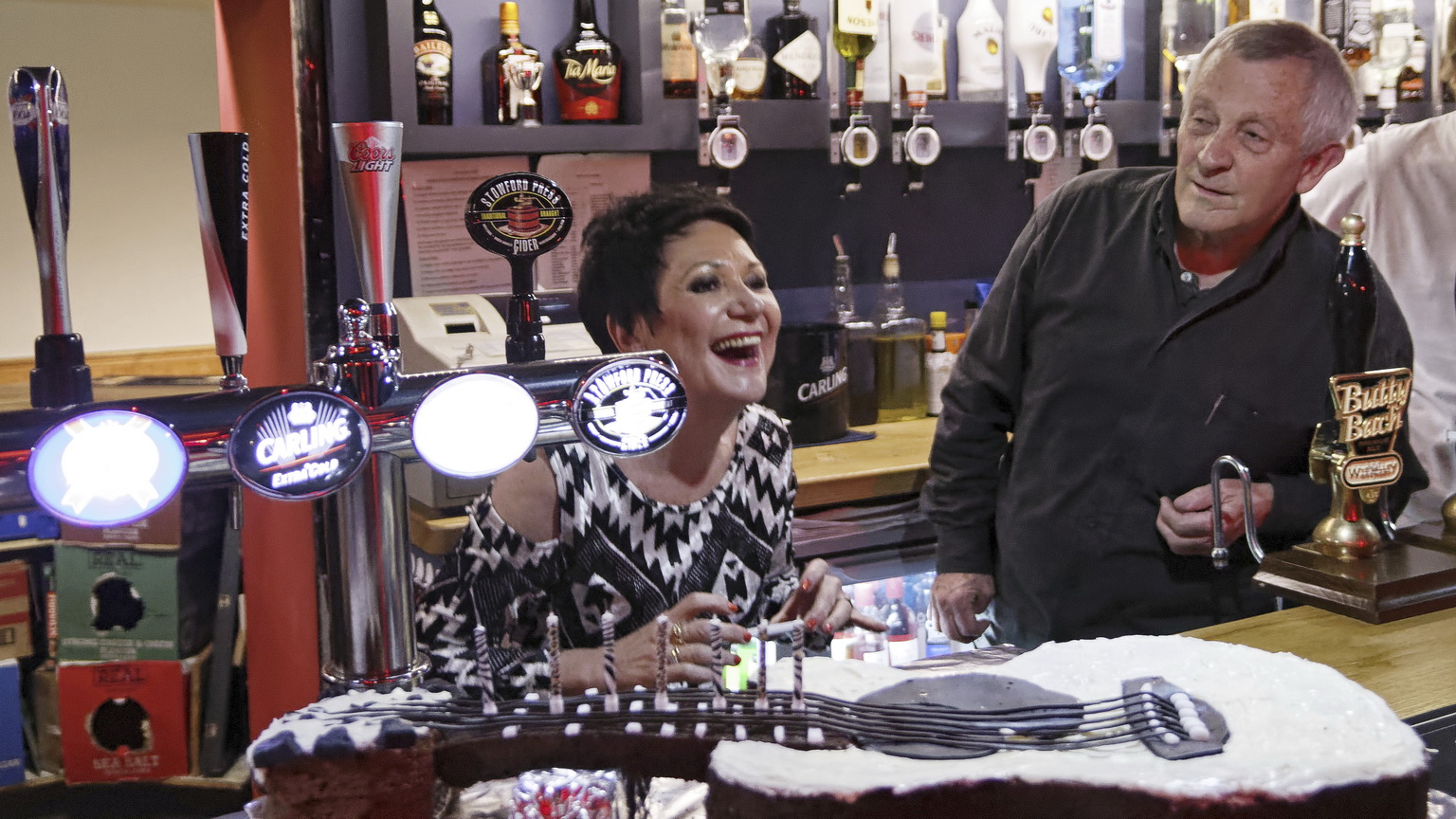 These songs song were recorded and played by many others such as The Andrews Sisters in 1939, the Glenn Miller Orchestra, Benny Goodman, Bobby Vinton, Billie Holiday, and Joe Patek who sold over a million copies of his album “Beer Barrel Polka.

During World War II, versions in many other languages were created and “Roll out the Barrel” was popular among soldiers, regardless of their allegiances. On VE Day, 9 May 1945, Humphrey Lyttelton played it standing on a handcart outside Buckingham Palace, Pub music was engrained in the national psyche