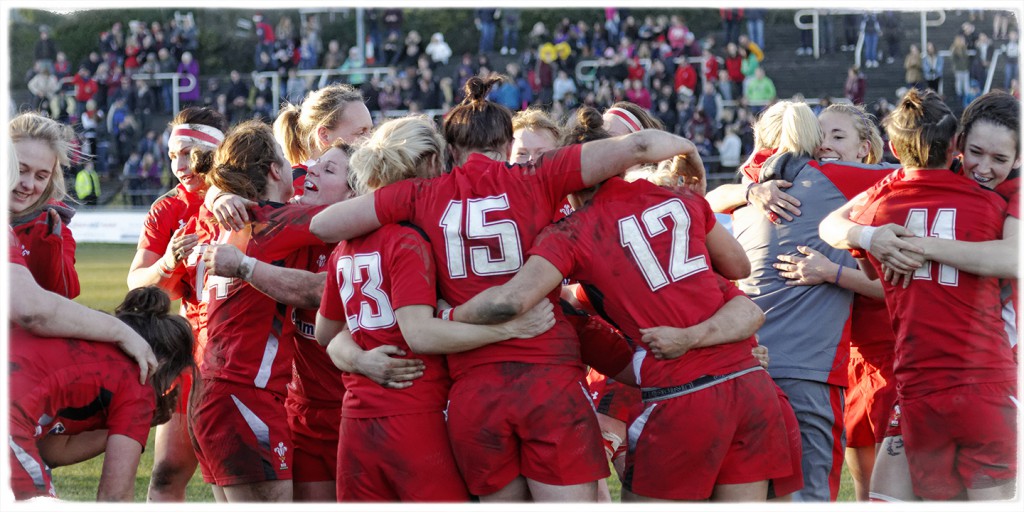 Wales jubilant at their victory over England

Swansea last Sunday enjoyed one of those sparkling days that, less the chill in the air, would bring comparisons with California. The sun shone in a clear blue sky invigorating the many who took the opportunity to just enjoy the day. Not so however the England Women’s Rugby Team assembled at Swansea’s St Helen’s Rugby Ground to open the current 6 Nation’s Tournament against their Welsh opponents. That this might lead to the besetting perception of the English as ‘arrogant’ and prone  to hubris in certain quarters, particularly Wales, was not it appears considered, and England deservedly crowned World Cup Winners only last August put out a Team which bore little resemblance to that winning squad for a variety of reasons, some of them understandable and well documented by a vigilant Michael Aylwin in his Guardian piece of 7th February (see link at foot of page).

Most of the England players who were recently awarded professional contracts, some twenty in all, were dispatched to Brazil as Sevens specialists to compete in the World Sevens Series, prioritised, because Sevens will feature for the first time in next year’s Olympic Games. Also a number of senior players have taken the opportunity to retire ‘at the top’ after winning their World Cup medals. What would not have been anticipated however was the shock news issued by the RFU with less than a fortnight to go before the opening match in the Six Nations, was the departure of award winning Head Coach Gary Street and the imminent departure of Assistant Coach, Graham Smith.

Setting aside the wisdom or otherwise of top-loading the Sevens Squad with their key players, England, because of their strength in depth, would still have been regarded by many as favourites. With such a backdrop, it hardly required the judgement of hindsight to see that England’s international reputation as current World Champions, would be subject to formidable pressure in that most ‘Welsh’ of cities and rugby fortresses, Swansea.

It has been written that England’s players were given just thirty minutes advance notice of the departure of their Head Coach before the news was officially released. To think that this would have no effect on player morale and motivation is wishful thinking of the most absurd kind. Players would be consciously attempting to put the matter out of mind all of the time in a way which would be bound to interfere with the crucial business in hand.
A team’s Head Coach, particularly I suggest in the case of Women’s Rugby, has a close relationship with his squad in a way that the other areas of rugby management will not easily be able to cover. That is, any void in that area is not easily filled.The importance of the right Head Coach I have seen for myself many times but particularly at the European Sevens Tournament at Lunel in France in 2005, when the England Squad, coached by Gary Street, ran out winners against Spain in the Final. At that event many of the now established world stars of England’s Squad were bloodied under Sevens Coach Street (Geoff Richards was the then National Women’s Head Coach). So, many of England’s brightest and best owe much to Street and for management to mislay such a coach, for whatever reason, can only be seen to be an absurd misjudgment, oversight, call it what you will, by the RFU.

Needless to say, Wales dethroned the current World Cup Winners and with something to spare. In fact I did think at times that I was watching the old England playing: the power in the scrum, the forward drives, commanding lineouts and the slick moving of the ball through the hands of the backs. Trouble is those playing it were wearing the red strip of Wales. All of the above is not to dismiss or belittle the nature of the Welsh win or their dominance. The result with Wales winning by 13 to 0 may not appear to be a crushing victory. But victory it was and I never at any time thought that England would have either the wit or the skill to change that result. The England Squad selected to play gave it their best shot, but they can only be considered to have started this crucial Six Nations with their hands metaphorically tied behind their backs and their minds elsewhere. 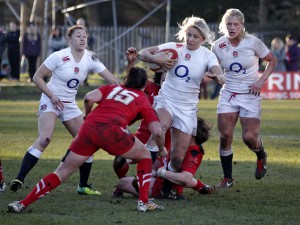 No way through for England

I have absolutely no idea what has prevailed at the RFU or why or indeed where any fault lies if fault there is. I have no inside knowledge whatsoever, only a tight lipped ‘it’s time to move on’ is offered to any and all. I only have my own reading of the situation to guide me. And the trouble is the very nature of the departure of England’s two senior coaches, and the ‘mutual consent’ release offered to the national press is bound to raise much conjecture. Every Premiership Club will have such a document in draft in their files, you just substitute one name for another and a bit more tweaking and Bob’s your uncle! Such an alleged agreement covers up much more than it reveals. That is the whole point. Confidentiality Agreements will have been signed and we may never know what has transpired. There can only ever be damaging rumour and suspicion. As ever, loyal supporters will be left in the dark. It will be forgotten with the passage of time. But it just isn’t good enough. Players and supporters are entitled to expect more.

Maybe the emergence of Women’s Rugby as a marketable commodity with money flowing into the coffers has clouded judgement in certain quarters. Often in employment matters success brings fame (Gary Street was named UK Coach of the Year and High-Performance Coach of the Year at of the UK Coaching Awards 2014) and appropriate recognition often follows such an achievement. That rugby is now a marketable commodity is evident in the award of professional contracts to key players. But if money has ever featured in the situation I suspect that it is only in the sense that due recognition if sought has money as the measure and this can lead to jealousies or personality issues. Indeed there are many cases in other spheres of activity where it has come down to personality and if that were to be the case here then supporters and players would have been truly let down, particularly in a working environment that stresses the importance of teamwork.

Supporters, as the name suggest, give their time, and often their good money in support of their team. It is a kind of love. And those who love naturally wish to have that love reciprocated and respond to having their views considered if not sought. They are a rugby club’s core asset with the club’s staff the essential skill base that enables a club to achieve what its supporters desire through the efforts of the players. All are valuable and equally essential to the success of the whole, but I just have a sense that somewhere along the line, and I know not where, that appreciation has been forgotten or overlooked.

Supporters will eventually forgive and forget, meanwhile, the RFU will have to commence the search for a Head Coach with experience in World Cup Rugby and a track record of winning ; Oh! but wait a minute- – – – – – ! 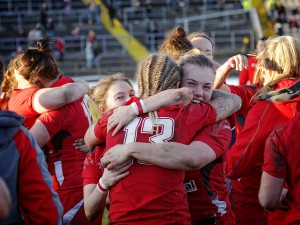